Last weekend was long, exhausting and challenging…but I would do it all over again.

What a way to start a blog post about a convention, huh? But it’s true! Let’s talk about my experience attending both days of UltraCon 2016 and go over some of the photos I walked away with while we’re at it.

As I’ve mentioned before, my wife first took me to Mizucon 2012 and since then we’ve been going to conventions in South Florida pretty regularly. In that time, we have seen some of the small cons go big (Florida Supercon comes to mind), and we’ve seen new cons spring up. One such new-ish con is UltraCon, which we attended for the first time this year. It has now transitioned from a small time effort to a legitimate convention, and this year it was hosted at the Miami Airport Convention Center.

You might be wondering why I picked the cover photo I did. Well, it seems like every con has a theme or cosplay that is more pervasive than the others. Tampa Bay Comic Con seemed to be overflowing with Harley Quinns. Florida Supercon was all about Deadpool. Maybe it’s just me, but I noticed a lot more clowns in this convention. Maybe it’s because of the string of clown sightings across the United States, maybe it’s because Halloween is coming up, who knows? 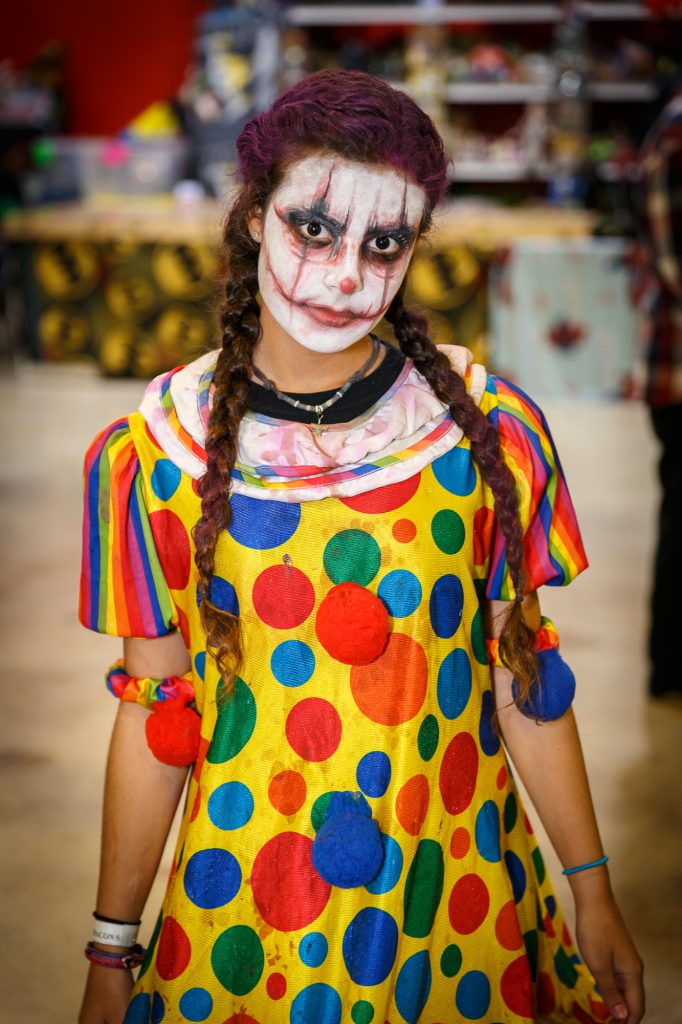 But not all clowns are scary. Heck, some of them are even nice… 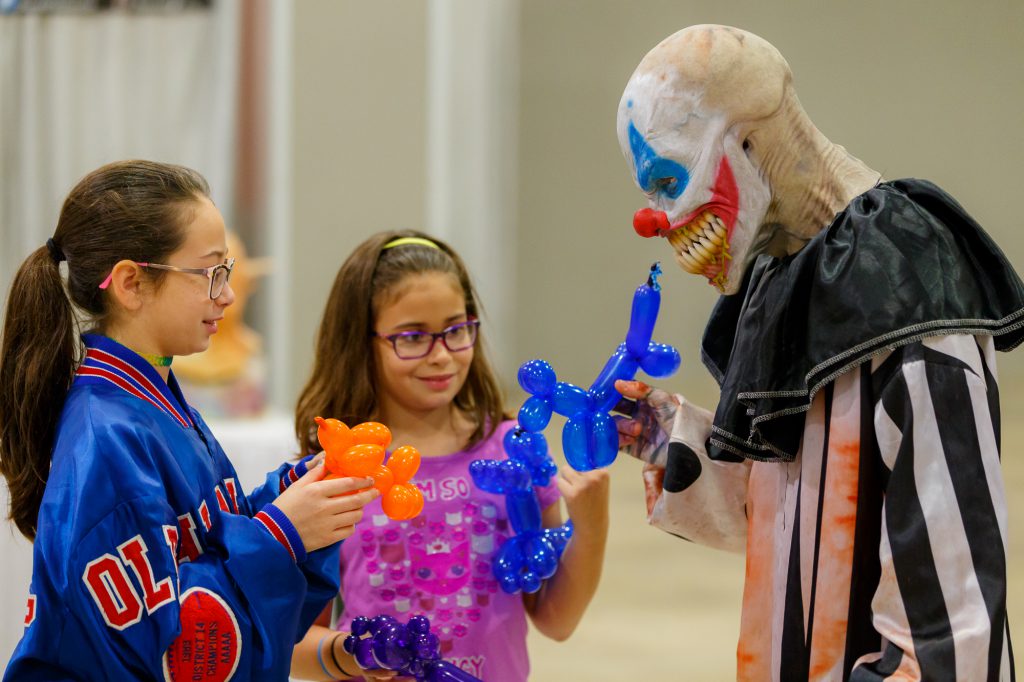 Anyways, let’s talk about the gear for a little bit. I brought along my Canon 6D, as it does a great job in low light situations like I knew the convention center would present. Now, I normally would have brought a ton of lenses, but this time I wanted to have less bulk and decided to just bring two zoom lenses – Canon’s 24-70mm and Canon’s 70-200mm. I figured that would cover most of the ranges I would need. I own the f/4L IS versions of both of those lenses, which are excellent in their own right. However, figuring the low light would present a challenge, and since I’m interested in upgrading to the f/2.8 versions of the lenses, I decided to borrow them for the weekend. My buddy and fellow amateur photographer Reinier let me borrow his for the weekend – thanks! Check out his website here.

As far as lighting, on Saturday I had my Yongnuo flash on camera along with my large Insignia diffuser. Interestingly, I got tons of questions about the diffuser from people interested in buying one – for the record, this is the diffuser I’m using. As you can see, it’s nothing fancy and it’s dirt cheap. But it does a great job of spreading out that light into something softer and more usable than using the bare bulb or a smaller Stoffen-style plastic diffuser. On Sunday, the situation had changed (more details below); while I used the same setup through most of the day, I used the flash off-camera on an umbrella stand for the cosplay contest. 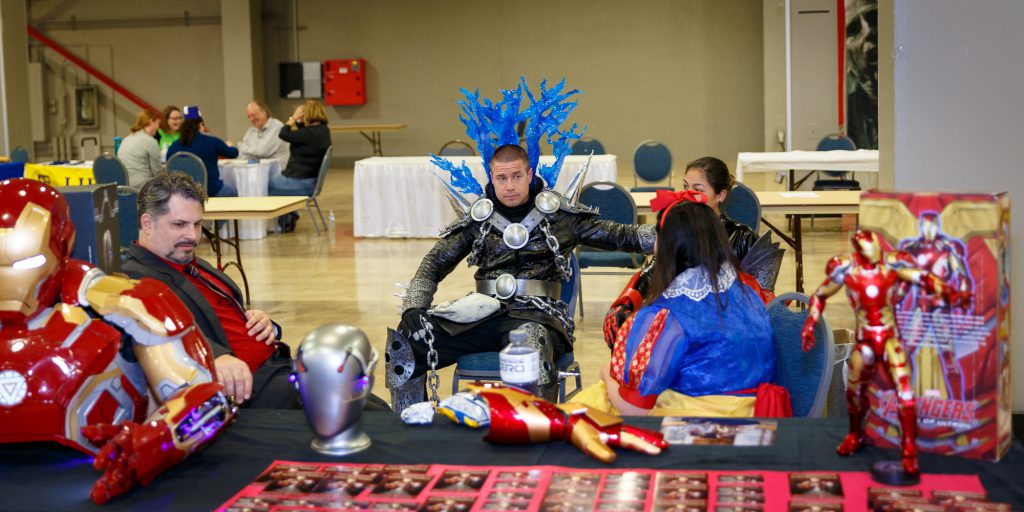 I knew that lighting would be a challenge – it always is in these dimly lit convention centers. And it was, forcing me to use ISO 1600 – ISO 3200 for most photos. Luckily the 6D does a great job in that ISO range. But this year something else was much more challenging: white balance. I’m not entirely sure why (given positive results in prior years), but the white balance was extremely difficult to correct in these photos, as walking around the convention center the white balance would constantly change. I shoot exclusively on RAW, so luckily using Lightroom there is no lost data in correcting the white balance in post…but since almost every photo required different white balance values, it took a bit long to edit the 200+ photos I ended up sharing. Ouch.

When we first came in on Saturday, we walked in as a belly dance routine was starting. I had no idea what it was, or who was performing, but I started snapping away. 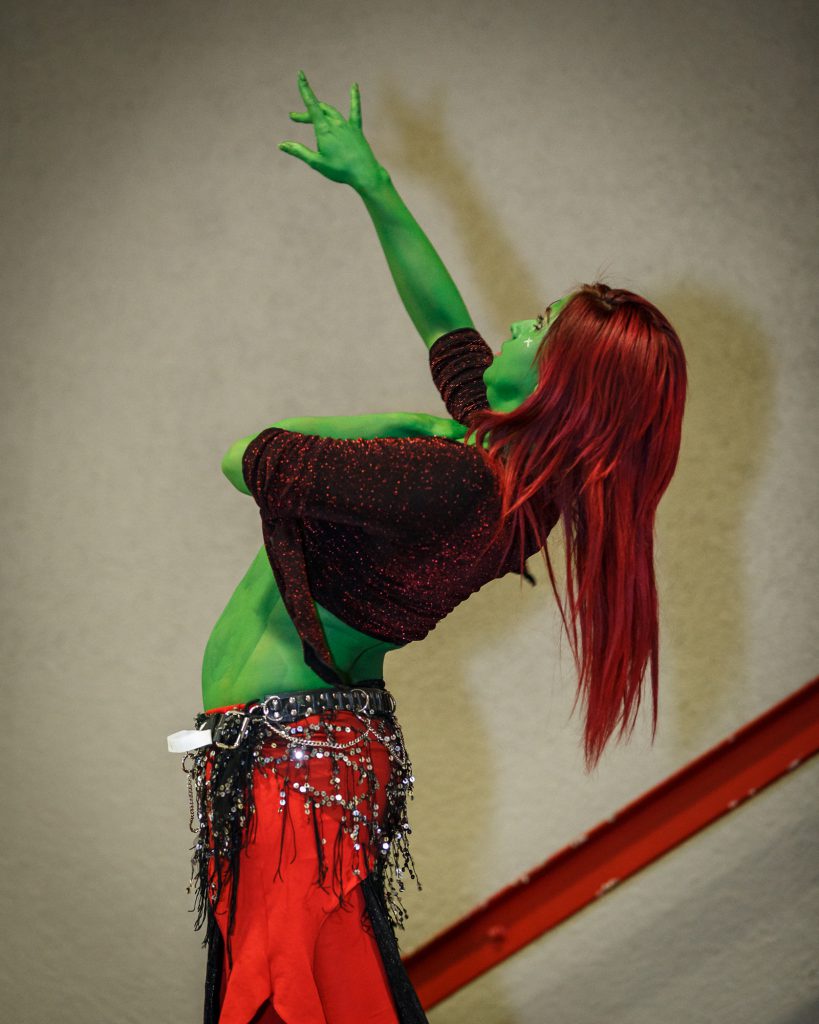 I’ve since learned that the performers were Hips of Destruction. I ended up with a bunch of great photos that will be shared with them. We follow each other on Facebook now, and I recommend you do too (follow us both!). 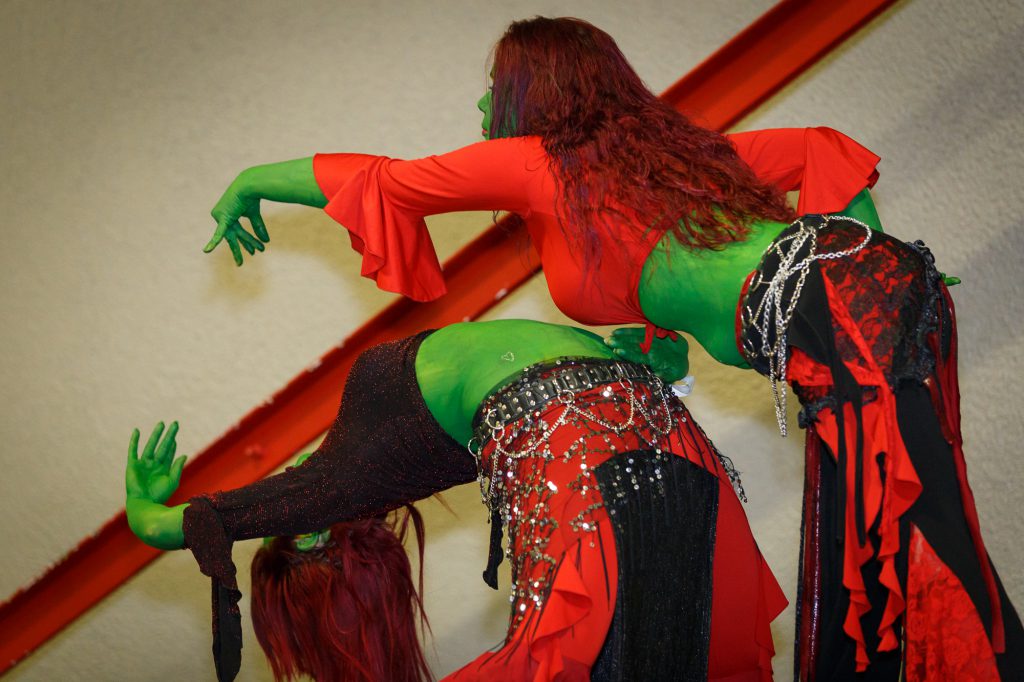 There are different approaches to photographing conventions. Some people have a photo booth or portable studio. That arguably produces the best quality photos, but it limits you to one location and reduces the amount of cosplayers you can interact with. I prefer to walk around, interact with and get to know the cosplayers I photograph. The challenge then becomes finding a way to isolate and highlight the cosplayer against a (typically) busy background full of other convention attendees and cosplayers. I usually prefer to accomplish this by getting a bit closer to my cosplayers… 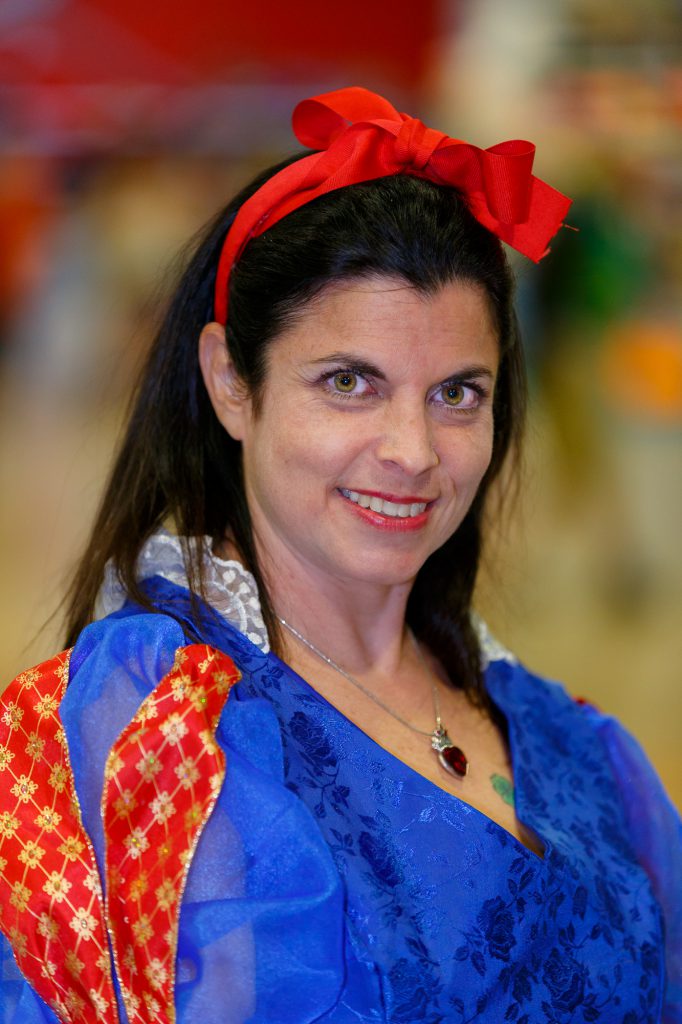 This Snow White cosplayer stands out beautifully from the background thanks to a combination of factors, but in large part because I shot this at 145mm and f/2.8. 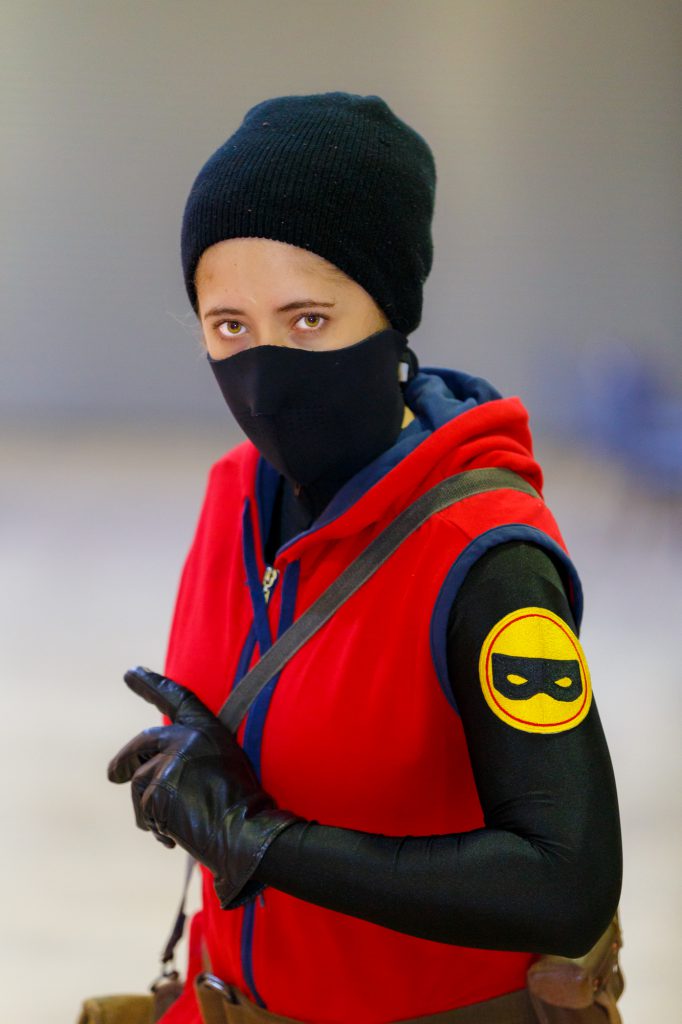 Likewise with this Team Fortress 2 cosplayer, shot at 182mm and f/2.8.

I know, not everybody likes heavy use of bokeh, but I favor it in many situations precisely because it allows me to portray the subject of my photo with few or no distracting elements in the frame, when in reality there was a ton of activity going on when we took this picture.

But sometimes, this is just not possible. Maybe you have the wrong lens, maybe there’s not enough distance between your subject and the background, whatever the case. Sometimes, you have to take a wide shot, and use composition and timing to make it interesting. 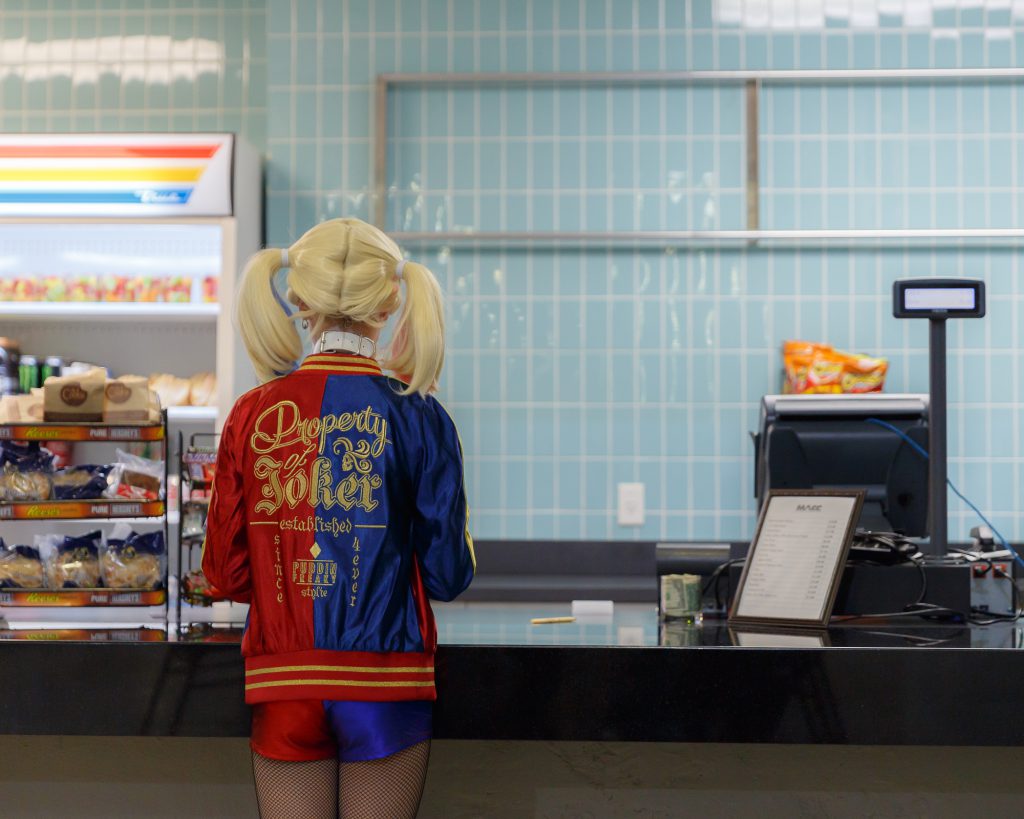 I love this photo.

We were taking a break and having some (overpriced) lunch. I see this Harley Quinn cosplayer come up to the counter, I take in the scene, I realize the potential, and snap this photo…and realized I was in full manual mode and in the rush didn’t correct my exposure…and I underexposed by two full stops. I quickly corrected my exposure and went to take other photos but the scene had changed – the attendant was back at the register, and the image just wasn’t the same. Again, the 6D wins the day by capturing so much detail that after changing the exposure by two stops in Lightroom, we end up with such a beautiful image, with only moderate grain that isn’t obtrusive. Moral of the story: shoot in RAW and don’t be afraid to push that exposure in Lightroom. Had I been shooting only in JPG…I would have lost this image. 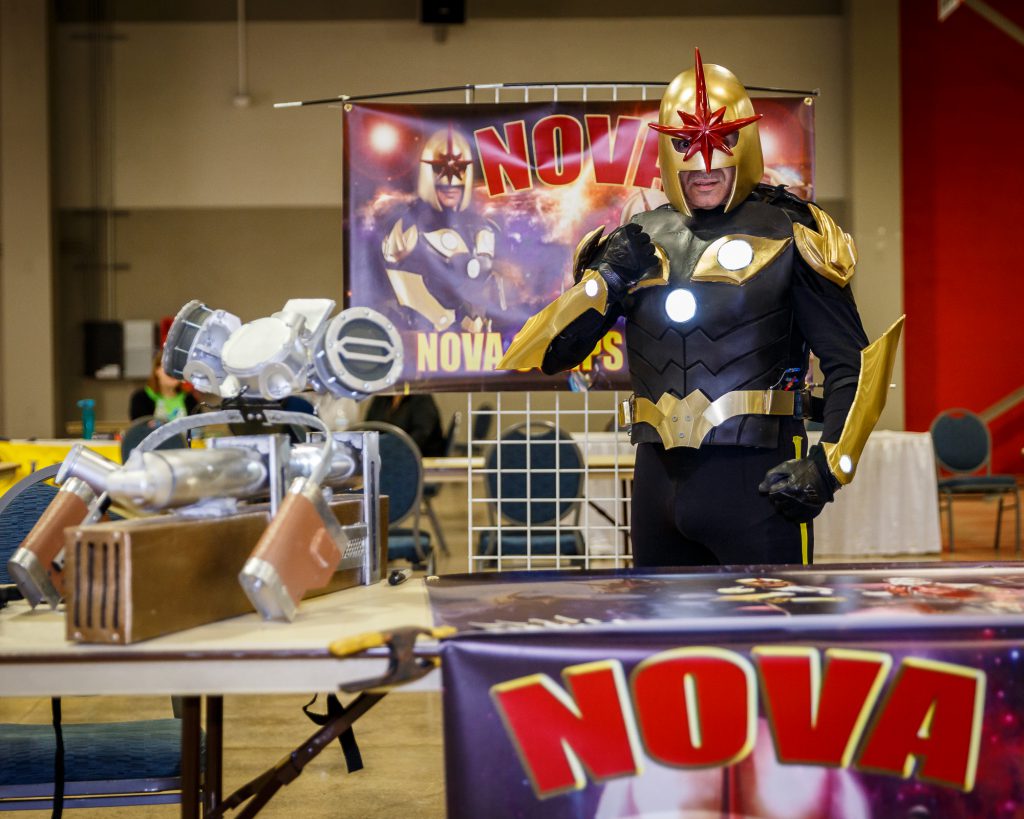 Meet Nova Prime of Nova Corps Cosplay. He is also the father of two very active cosplayers. I had the pleasure of speaking with him at length about his cosplay, about conventions in general, and about cosplay competitions. Nova Prime was a featured guest and a judge for the cosplay contest both days.

One of the many things I learned during our talk is the importance of store-bought vs. self-made costumes, as well as stage presence. Some of the cosplayers I photographed at this convention, I’ve photographed in the past. Their cosplay is always the same, and I found out from speaking with Nova Prime – is purchased as a rather expensive kit. The result is a great looking cosplay that doesn’t win any awards. 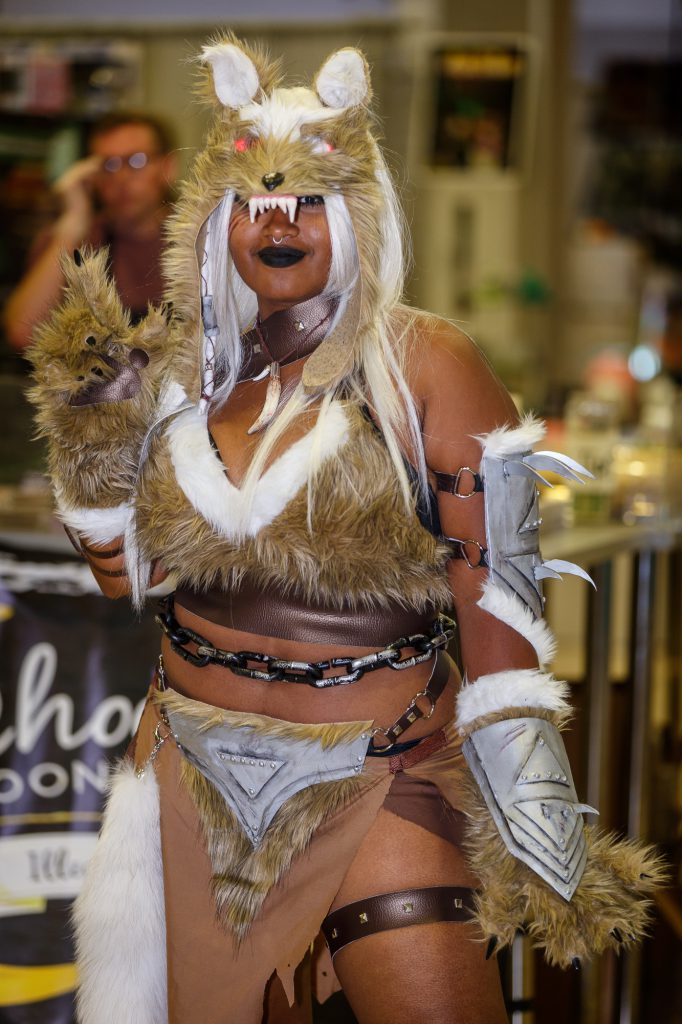 On the other end of the spectrum is this custom, hand made, wolf cosplay. She and her boyfriend (cosplaying as a hunter) won the top prize at the cosplay contest that day. After speaking with Nova Prime, I learned that it was because every single stitch was done by her, by hand. It’s a labor of love and originality, with tons of attention to detail. 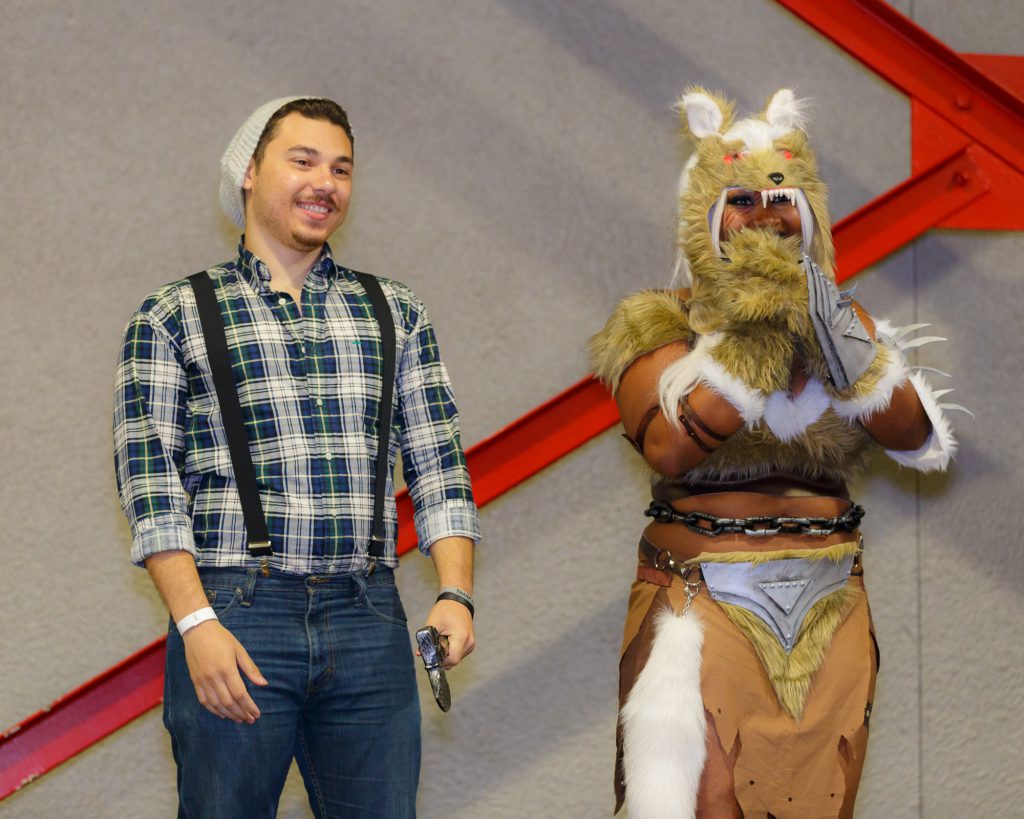 Again, my approach is to walk around and interact with people. Likewise, my wife loves to meet new people and starts conversations everywhere. During our lunch break, we met Padrino, who runs a MMA gym and is quite an interesting character. After some conversation, it came up that the UltraCon organizers did not have staff photographers, and there would be a MMA event later that day which could benefit from having a dedicated photographer by the cage. Padrino put us in talk with the management, and guess what? I ended up behind the scenes during the fight prep and cage side during the three fights of the night. That’s an entirely different story, one which will get its own blog post in the near future. Sit tight.

I had spoken extensively with the person in charge of the convention, one of the judges and featured guests, and one of the MMA trainers helping organize day one of the convention. They knew about me and that I would be back the next day. On Sunday, I was approached and asked to photograph the cosplay contest and get a group photo at the end, as none was taken the day before. I gladly agreed.

Like I mentioned earlier, this changed the situation. Now that I was “official” and would not be yelled at if I got in the way, I brought in my light stand, umbrella, remote triggers, etc. I set up in front of the stage, so I could light up every cosplayer who entered the contest, and then light up the group shot at the end. Unfortunately I don’t have a good behind the scenes photo, as I was by myself and had the camera on a monopod. I did manage to capture this blurry cell phone picture to give you an idea: 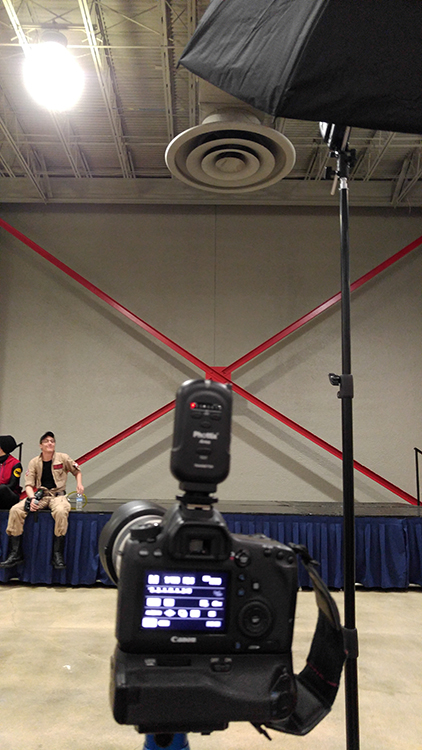 I recruited one of the cosplayers to be my lighting test model, and we played around with it until we had something we liked. Thanks! 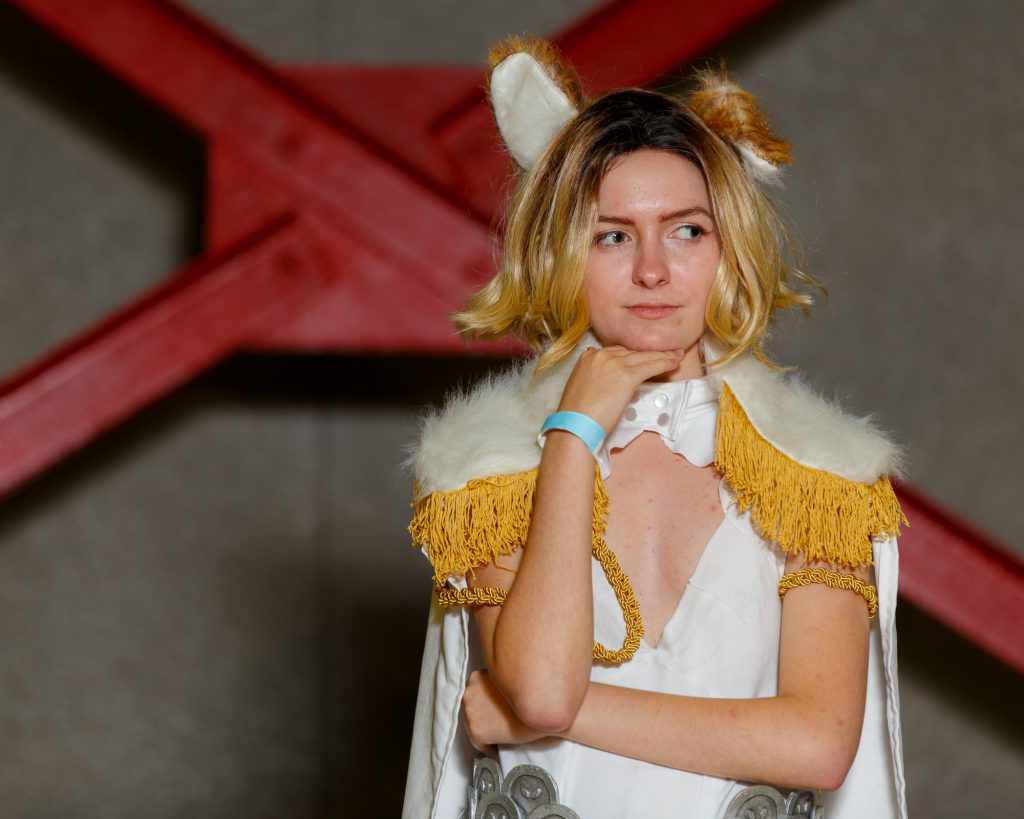 Here’s a shot of the very awesome presenters. 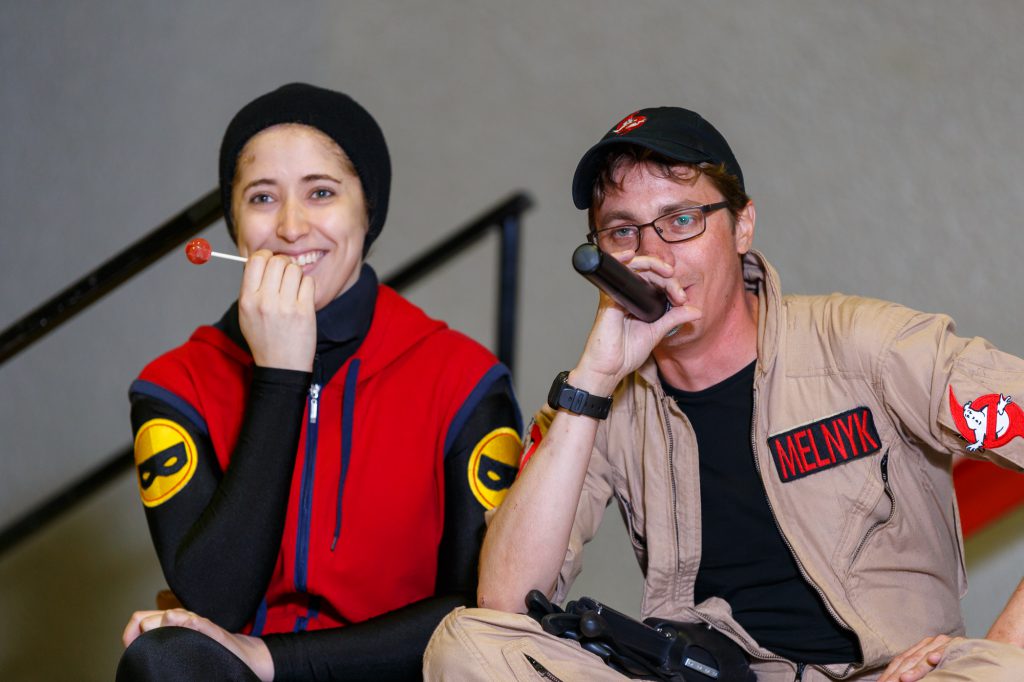 As you can see, having the light up on the stand, reflecting off an umbrella, provided wider coverage and smoother lighting that I would have otherwise accomplished with the on-camera flash + diffuser set up I had used earlier. I’m much happier with the results of the second day’s cosplay contest, and just wish I had brought a second light and umbrella kit. 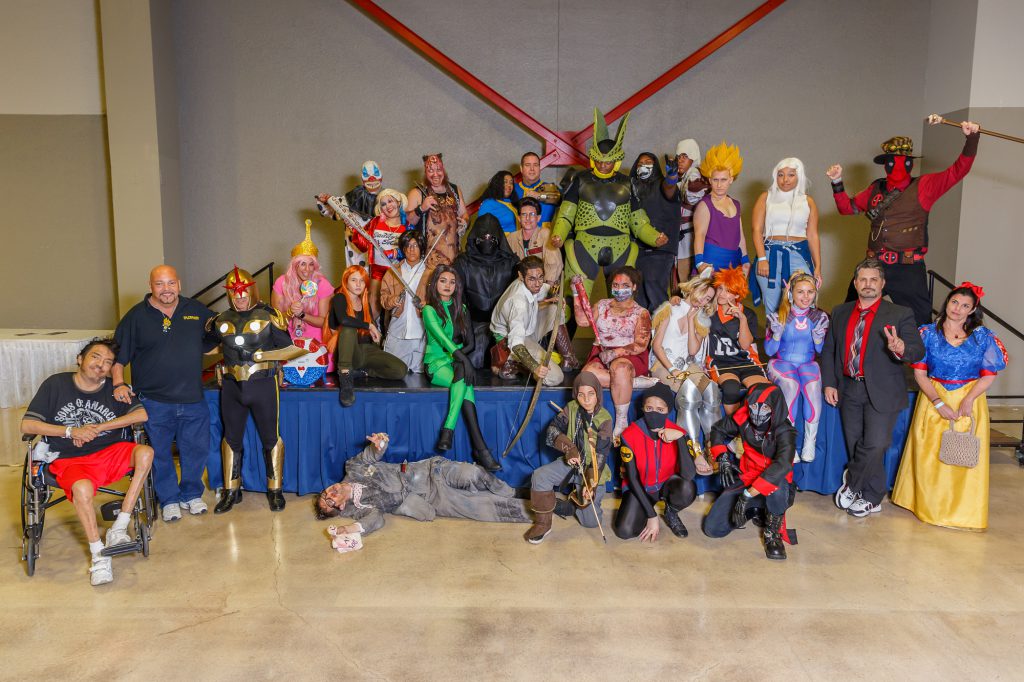 And the final group shot. This was taken using a monopod for height, using the Canon 24-70mm at 24mm and f/4 for a little bit of extra depth of field.

Like I said at the start of this blog post. It was a long weekend, with a ton of walking. You wouldn’t believe just how heavy a dSLR with grip, premium quality zoom lens and external flash starts to feel after two days! But I ended up with decent photos, great stories and with the experience of having met many interesting people. Sure, the convention had a few shortcomings in organization and content, but those are growing pains that all newer cons go through. With the dedication I saw, I have no doubt that in the near future, UltraCon will be a convention everyone will be rushing to buy tickets for.

You can find the rest of the photos on our Facebook page here. Please feel free to tag yourself and your friends, and share the photos. If you are in any of these photos and would like to purchase a high resolution copy without our watermark, you can do so from our gallery. Thanks for your support!

View the blog post about the MMA fights here and the photos in our gallery here.

Y. Aragon
Convention,Portraits
MMA at UltraCon 2016
A baby, some spaghetti, and a camera...
↑