If you haven’t read my earlier blog post about UltraCon 2016, do so first, as it will add context to this one. Check it out here. 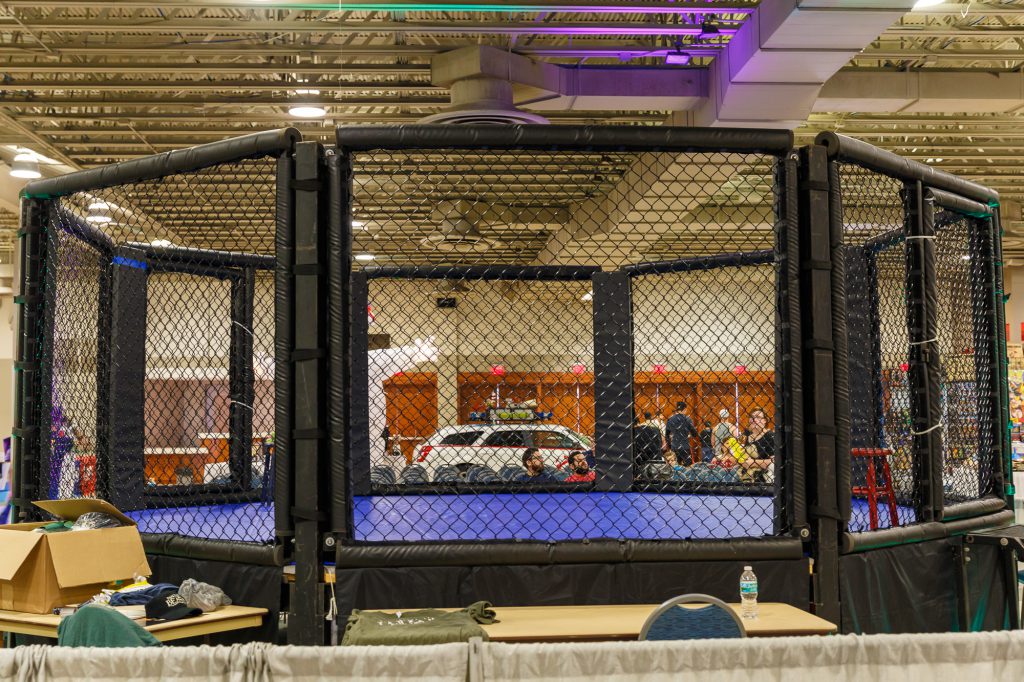 While I’ve done some sports photography in the past, it’s always been outdoors and in daylight, which is an entirely different experience than photographing fighters in very dim light indoors. As mentioned in the blog post about the convention, I spent the day between ISO 1600 and ISO 3200 while using an external flash. I was told no flash photography for this portion of the day – so most of these photos were shot in the range of ISO 6400 to ISO 12800. I used the Canon 6D for these shots, as it was the only camera I had with me at the convention. Since I was going to be cage side, I used the Canon 24-70mm f/2.8L, never changing aperture from f/2.8 – to let as much light hit the sensor as I could, and to blur out the fence around the cage as much as possible. 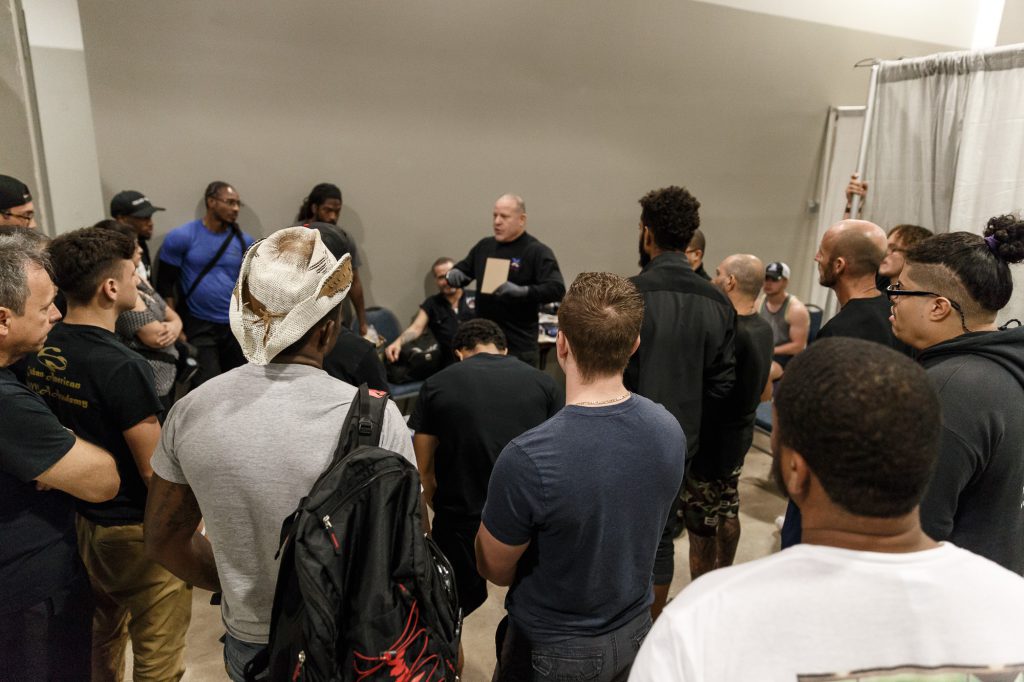 I was allowed “backstage” during the prep leading to the fights, where the fighters were given the rules by the referee and they prepared for the fights. This was my first time watching what goes on behind the curtain for these events, and it was interesting to say the least. I was particularly interested in the attention and detail put by the trainers in wrapping their fighters’ wrists. Due to safety concerns, fighters were not allowed to come pre-wrapped or use off-the-shelf wraps. Instead, they had to be wrapped on location, in full view of everyone else. 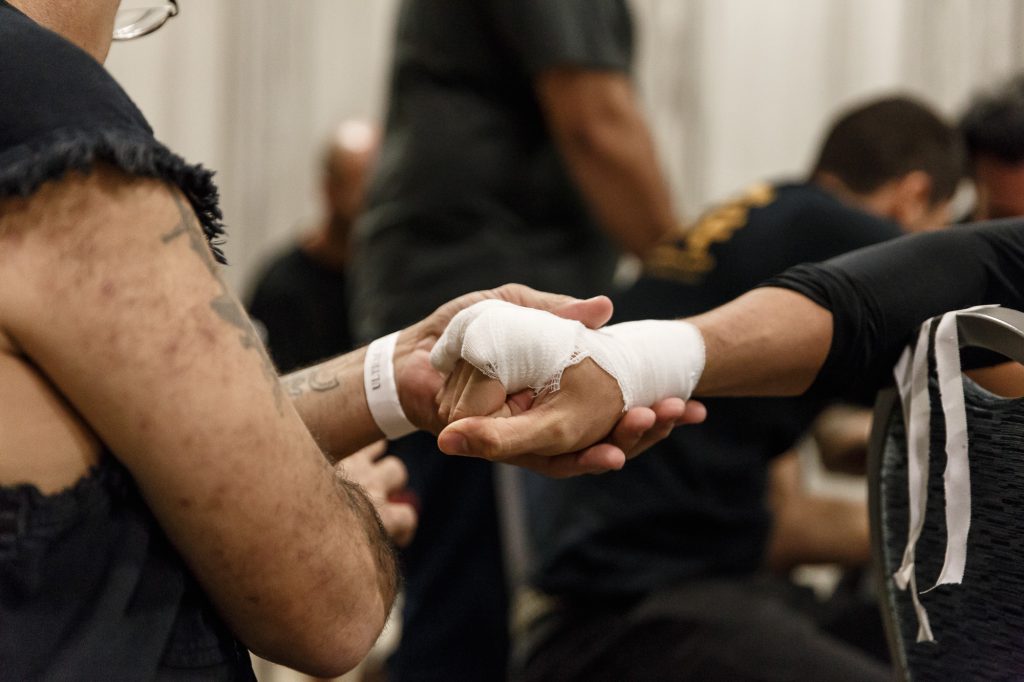 That’s Padrino, the owner of an MMA gym and one of the trainers that helped run the event, wrapping up one of his fighters. Very lengthy process, but he seemed to enjoy doing it, as he did it well.

It was interesting to notice how each fighter handled the prep and “got in the zone,” so to speak. One of the fighters wore a cowboy hat and listened to music through headphones up until the moment of his fight. Another fighter was loosening up and getting geared up, while keeping a serious demeanor. 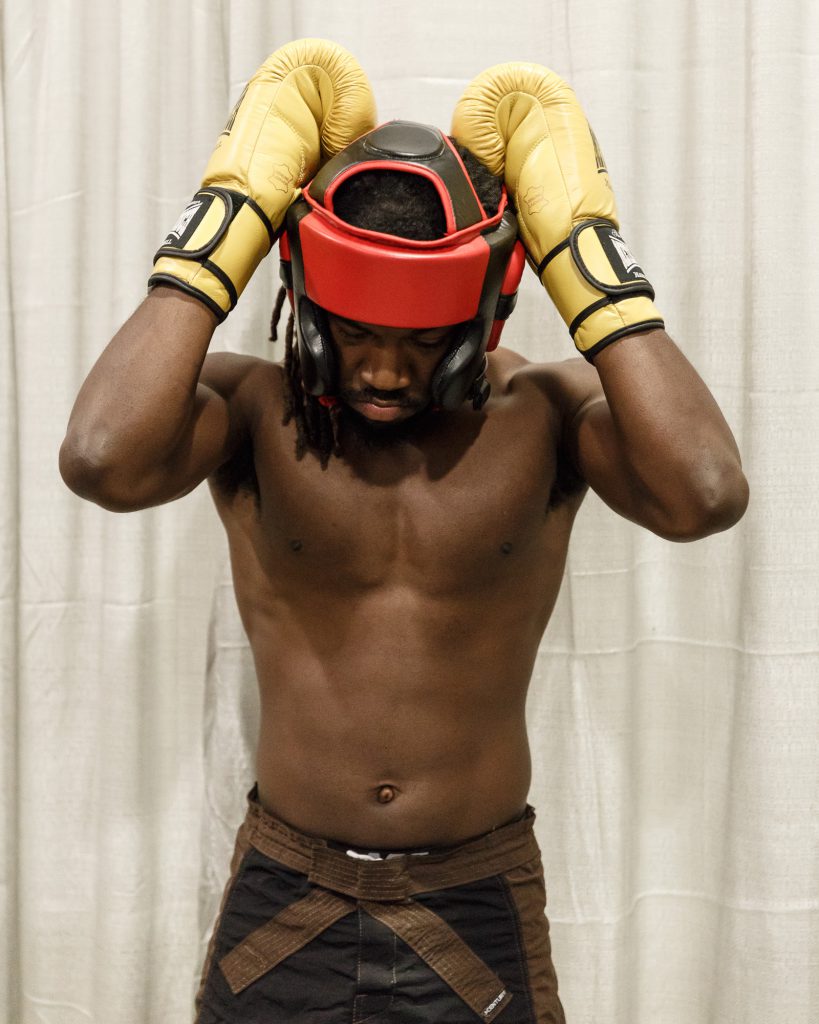 While others were all about staying active. 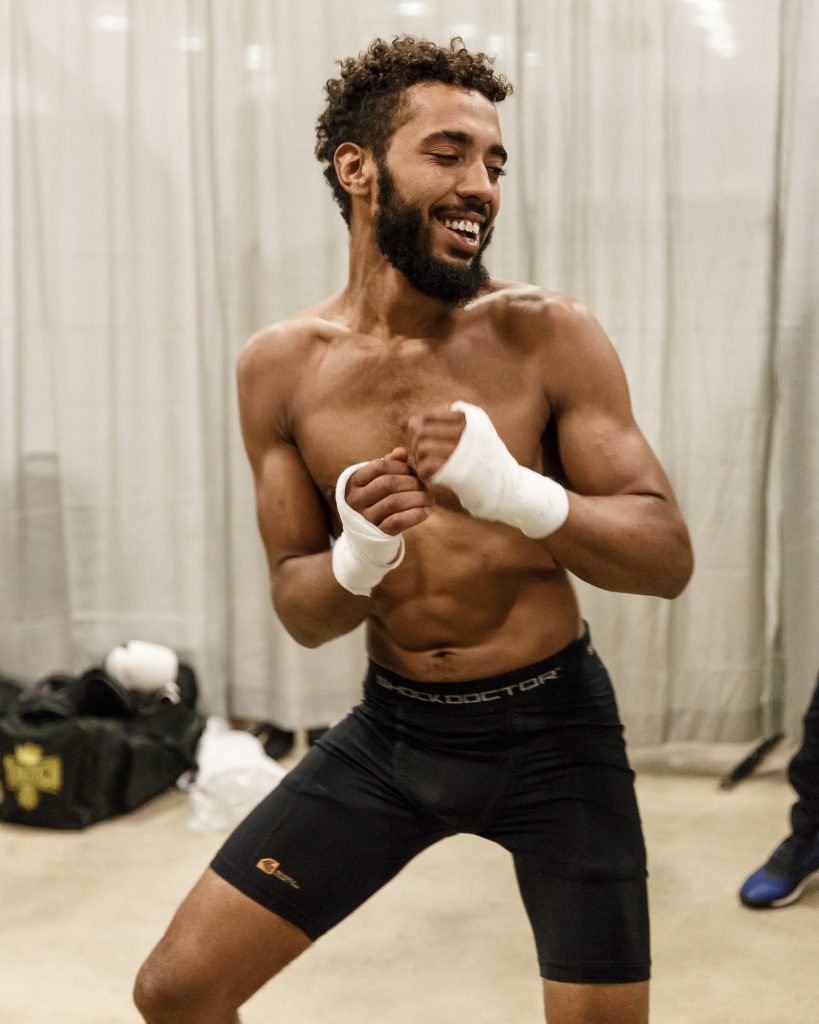 This fighter refused to pose for me, and told me “I would get all the shots in there” (referring to the cage). I did, as well as getting this shot of him dancing and many of him kicking and practicing backstage. His energy was contagious (to me), but I wonder if any of his antics were designed to be an intimidation tactic to the other fighters. Who knows?

The event organizers had installed a small fog machine to face the fighters as they came towards the cage, which made for some cool photos I think. 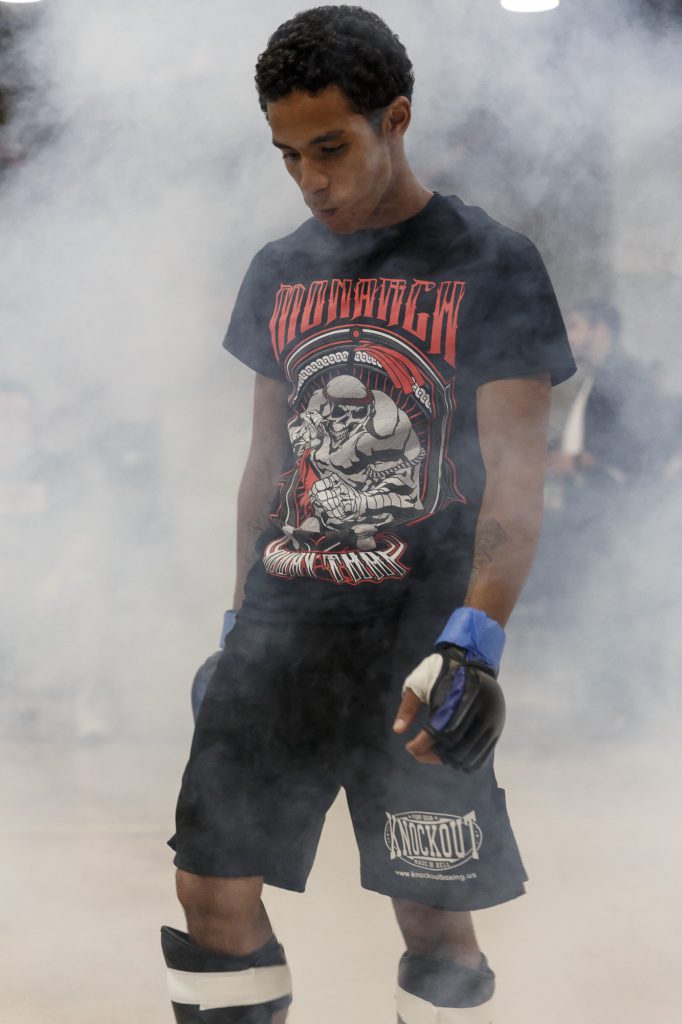 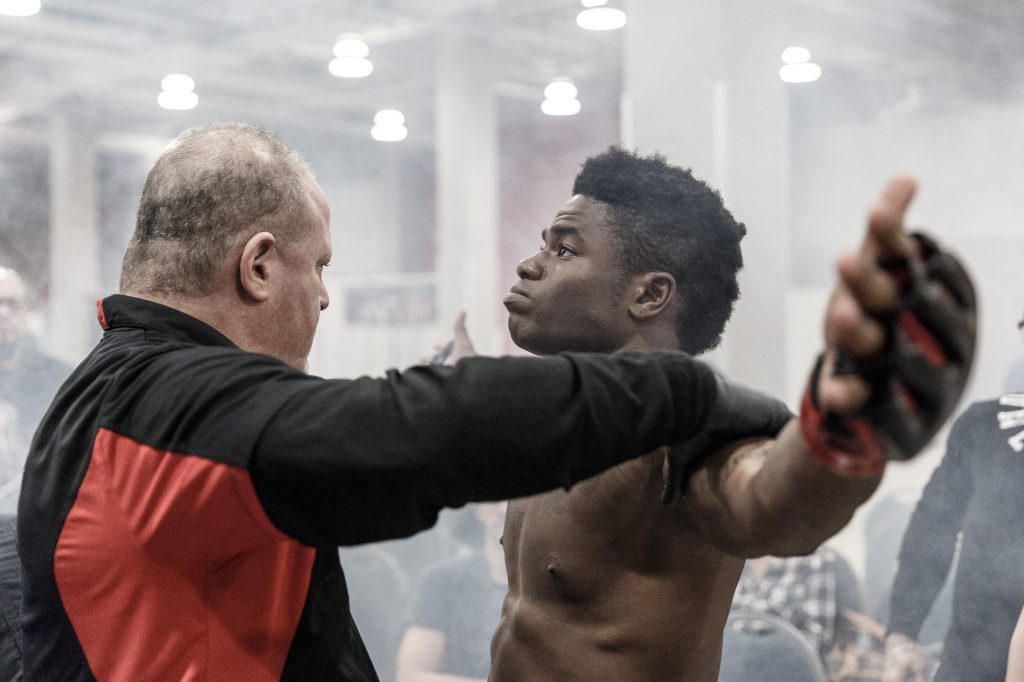 I don’t know enough about MMA to give a commentary on the actual fights. There were three fights organized, and they were brief, fast and full of action.

The first fight went until the end and the decision was reached by the judges. 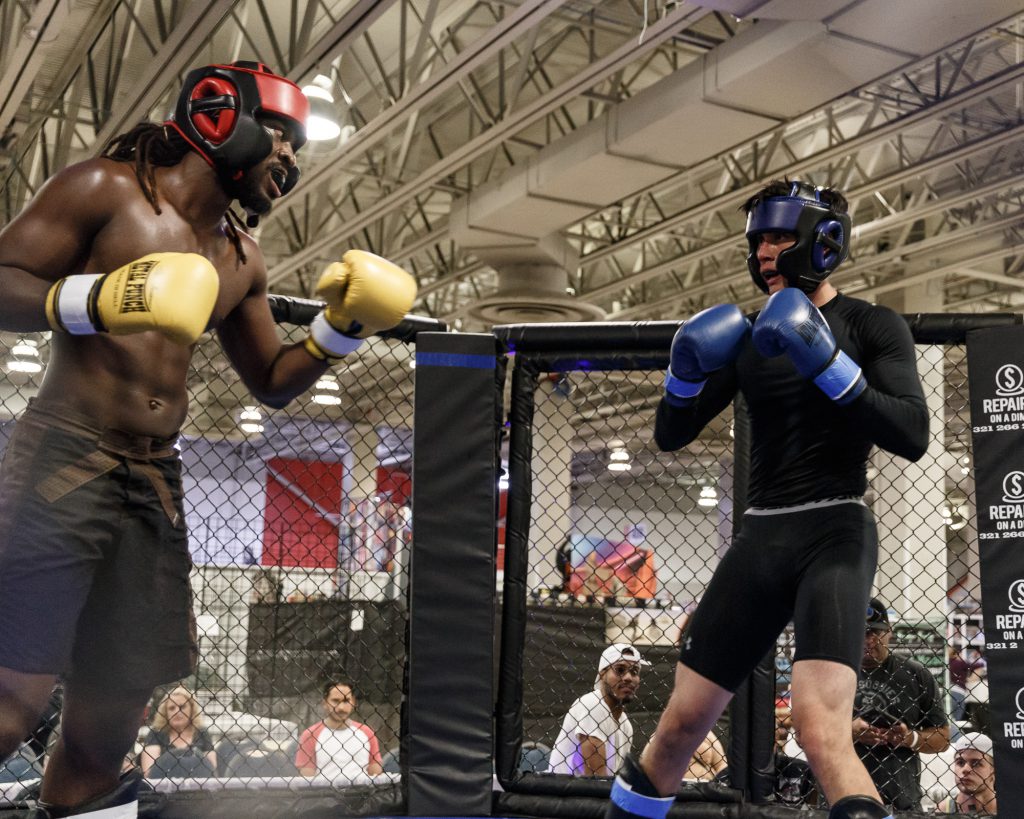 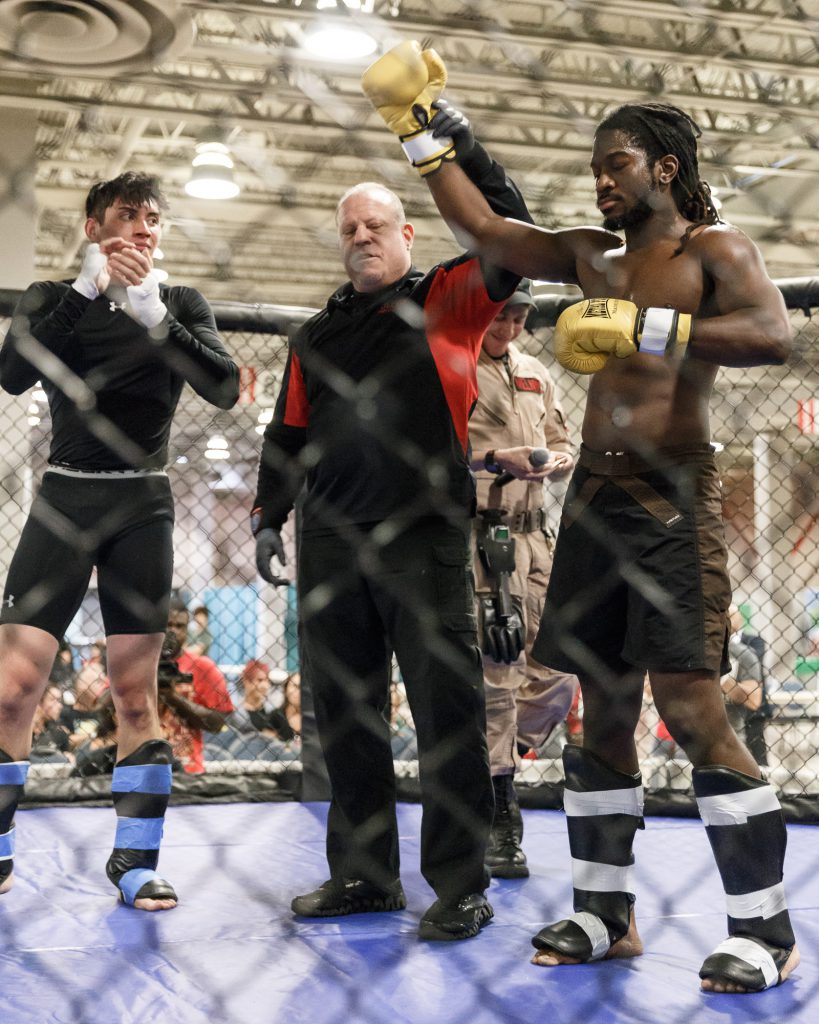 The second fight was ended in the second round (I think?) on a technical knockout. 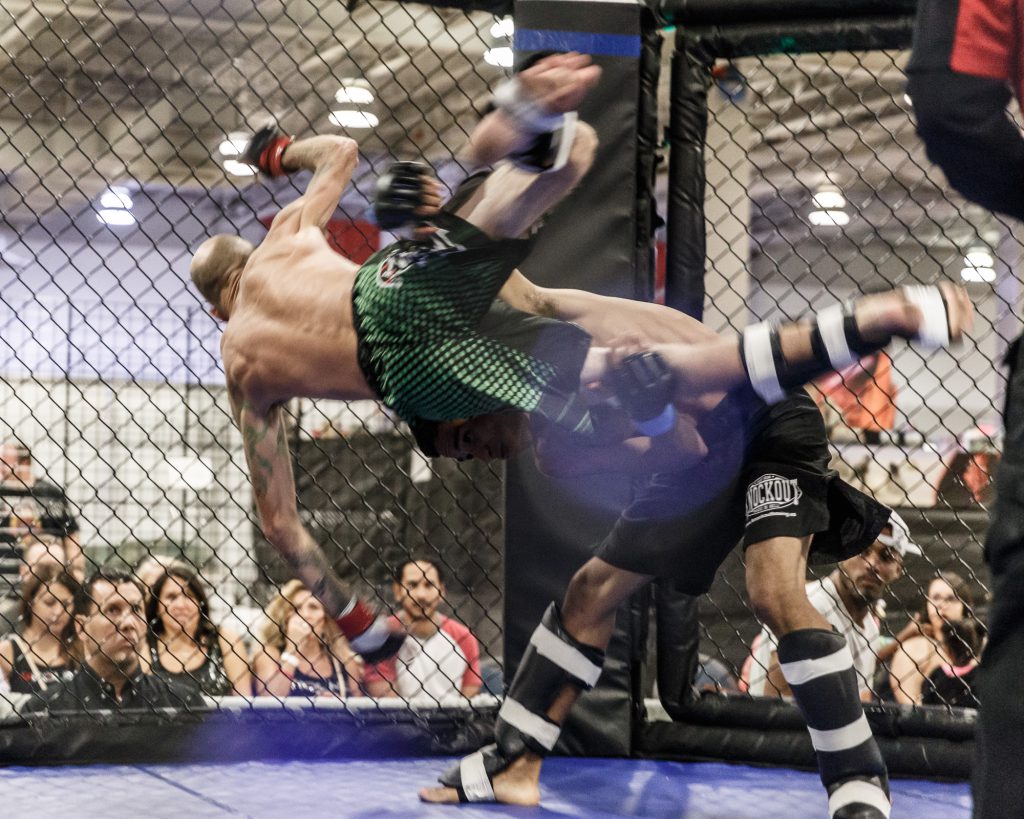 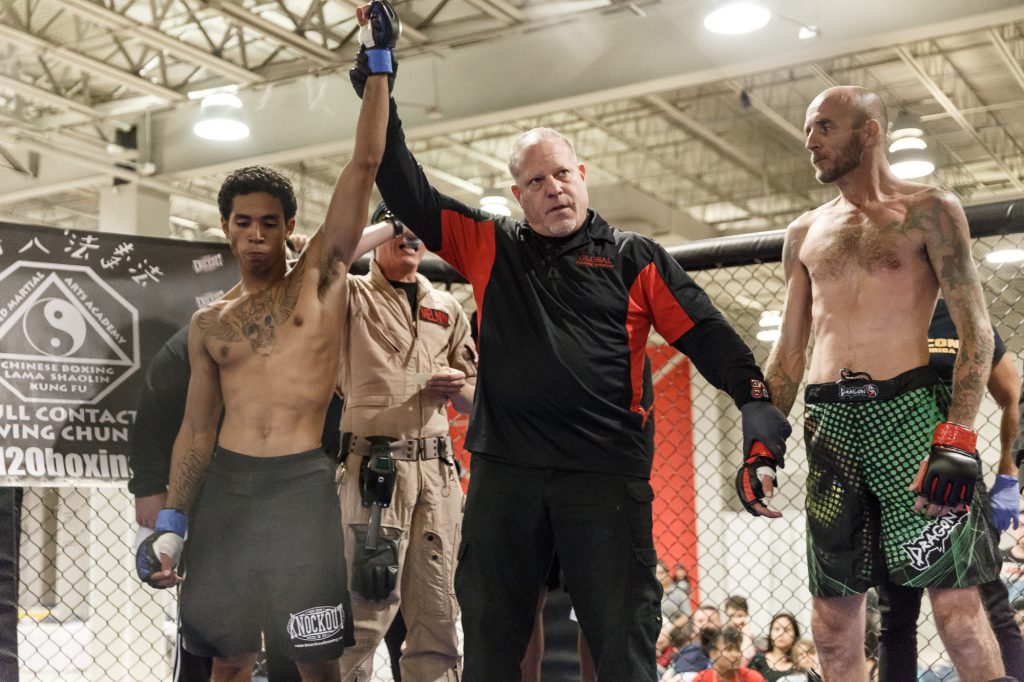 To get beyond the fence, I literally pushed my body against the cage, and sometimes the fight came really close to me. Right before the technical knockout in this fight, I grabbed this frame: 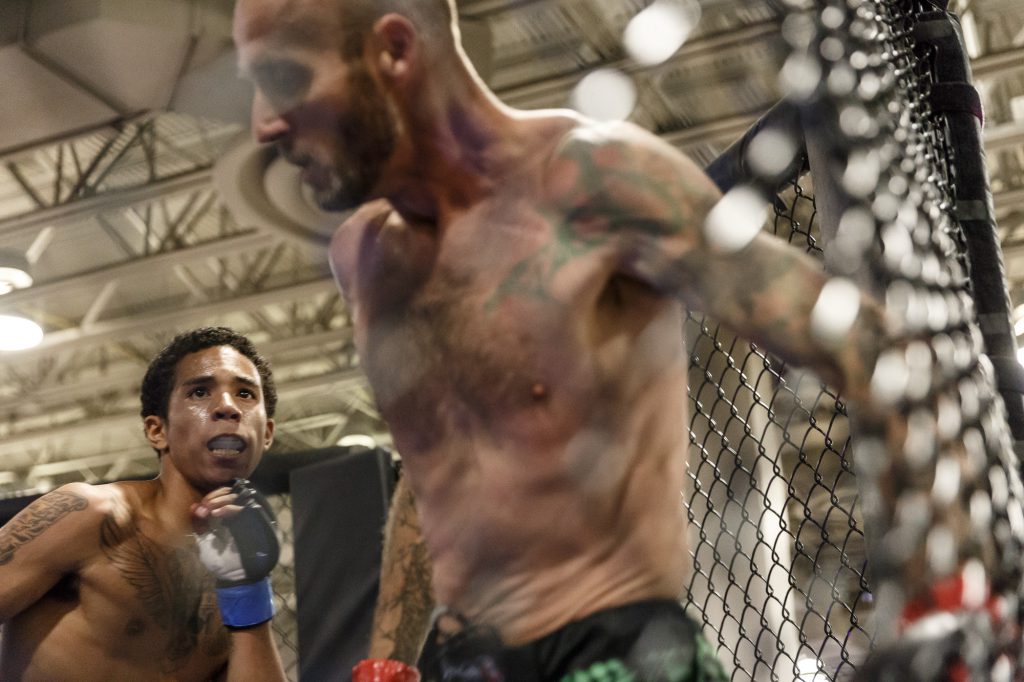 You can clearly see the intensity and fury driving these fighters.

The last fight was for an actual championship belt. These guys were intense, and anyone who claims these fights are staged has never been cage side and watching the punches and kicks landing. The fight ended by submission, as one fighter was about to be “put to sleep” as the coaches call it. 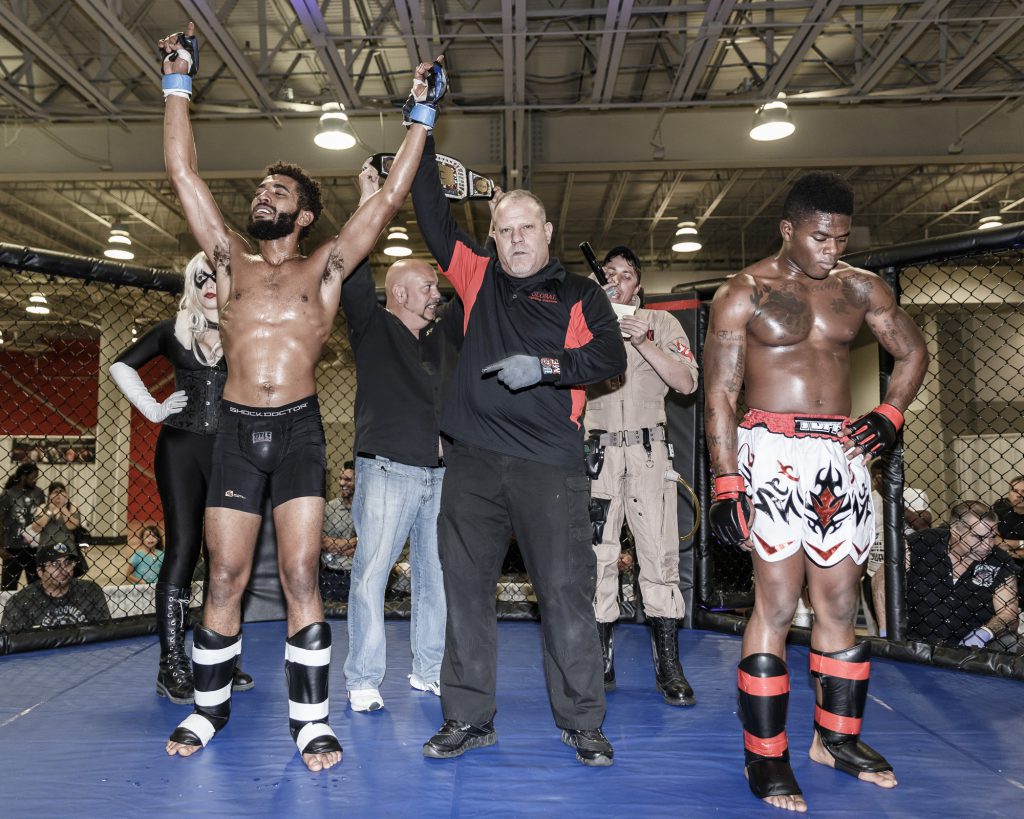 It was a very intense (and fun) few hours and I’m glad I got to be a part of it. I learned a lot, including the hardware limitations of the equipment I was using, and how to work with it to get some good images. As I said, I know next to nothing about MMA, so I may have labeled things incorrectly – point it out so I can learn and improve this blog post.

These are only a few of the many photos posted to our Facebook page. Check out the rest of the photos there. If you would like to buy any of the photos, you can do so from our gallery here. Thank you for your support!