I had to travel for work again, this time to cover an examination under oath in Jacksonville. I was flying in early that morning, and flying out at night the same day. All in all, I would have maybe two and a half hours before and two hours after work that I could use to photograph something, somewhere in or around Jacksonville.

I was more than a bit excited for this trip, as I hadn’t been on an airplane in 16 years. The last time I was on a plane I was 12 years old and had no knowledge of photography. I was also looking forward to this trip because I had just received a Canon 5DsR from Canon Professional Services to evaluate, an excellent landscape camera with a monster 50 megapixel sensor, and I was bringing it along for the trip. I selected a window seat when booking, as I knew I would want to photograph the view.

I loved seeing the sun shining on the cloud formations. Beautiful.

I know it’s probably corny, but it was so new to me, I was having too much fun photographing the clouds while everyone else on my flight slept.

Anyways, let’s talk about the gear!

As I mentioned before, I was using Canon’s 5DsR for this trip. I left the 6D at home as I didn’t want to carry anything I didn’t need. In the plane I was using the Canon 24-70mm f/4L IS lens. I only had the 5DsR with me for a few hours at this point, so a lot of the time I spent playing around with the settings. One feature I started using immediately was the silent shutter option…which was very quiet indeed and a welcome relief as I kept snapping away while everyone else slept. I’m fairly sure I wouldn’t have taken as many cloud photos had I been using one of Canon’s 1Dx bodies with their notoriously loud shutters.

I also brought the Canon 16-35mm f/4L IS and 70-200mm f/4L IS lenses, along with my tripod (disassembled in my carry-on bag). I chose to leave behind the Sigma 150-600mm C lens, which I somewhat regretted later on. Still, I could only carry so much equipment myself, and I definitely did not want to check in any bags.

Knowing I would have a limited amount of time for photography, I did my research prior to my trip, and decided I really wanted to go to Big Talbot Island State Park, which was a reasonable drive out from Jacksonville.

I was particularly interested in visiting the so-called Boneyard Beach, where many dead trees could be found right on the beach for great photo ops. I’m very glad to say, I made it!

This is a 74.6 megapixel panorama taken using the 24-70mm lens at 24mm, on a tripod. I love the colors and detail produced by the Canon 5DsR. For some reason, it felt like the auto-white balance results from the 5DsR far surpassed those from the 6D, so photos looked much better right on camera.

From where I am taking this photo, there is a sheer dropoff to the actual beach. Had I not been wearing a suit, I would have tried getting down there. Unfortunately, I couldn’t risk showing up to my client’s examination under oath covered in mud and dirt! So I settled for photographing what I could from up there. Next time I visit I will most definitely get down on the beach level though, so much potential for close up wide angle photography. 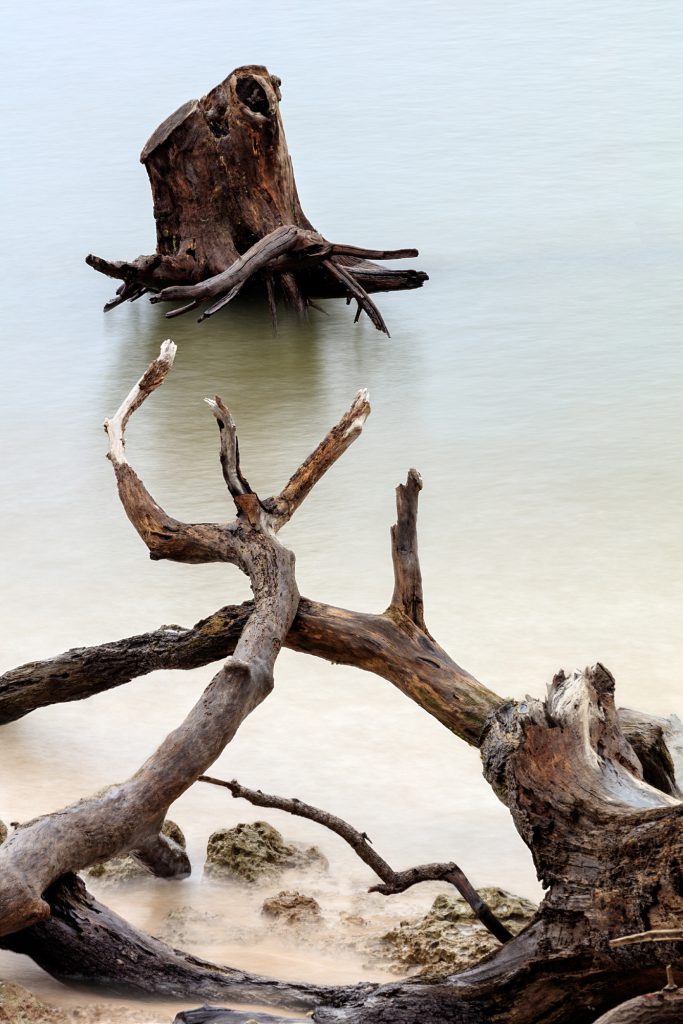 This is probably one of my favorite images from the trip. This was accomplished by taking 45 or so exposures using the Canon 70-200mm f/4L IS at 200mm, then stacking the exposures in Photoshop to achieve that smooth water. In a situation where you have too much light for a long exposure and no neutral density filter, this works beautifully I think.

I thought the tree skeletons were very interesting, and again, regretted not being able to get closer physically. So I relied on focal length to help me get there. In the photo below, I shot multiple images at 200mm and then stitched them together, which thanks to the 5DsR’s massive files, after cropping still ended up as a 120 megapixel image.

The camera blew me away with every photo. The detail captured here is not something I’m used to getting out of the otherwise very capable 6D.

At this point I had to leave the park to make it to my appointment on time… but I came right back after finishing up the business end of the trip. In the morning, the weather had been ugly but there had only been very light sprinkling, nothing too concerning. Unfortunately, in the afternoon, the weather had gotten considerably worse. I kept driving to the park in the hopes it would clear up by the time I actually made it there, but the rain never stopped.

I decided to take my chances, knowing that the camera and the lens I would be using are both weather sealed and could operate fine in moderate weather. My hope was to find a way down to the beach, now that I had changed out of my suit and could get dirty if necessary. Unfortunately the rain got stronger, and I only managed to get one last photo of the beach, never getting the opportunity to make it down there. 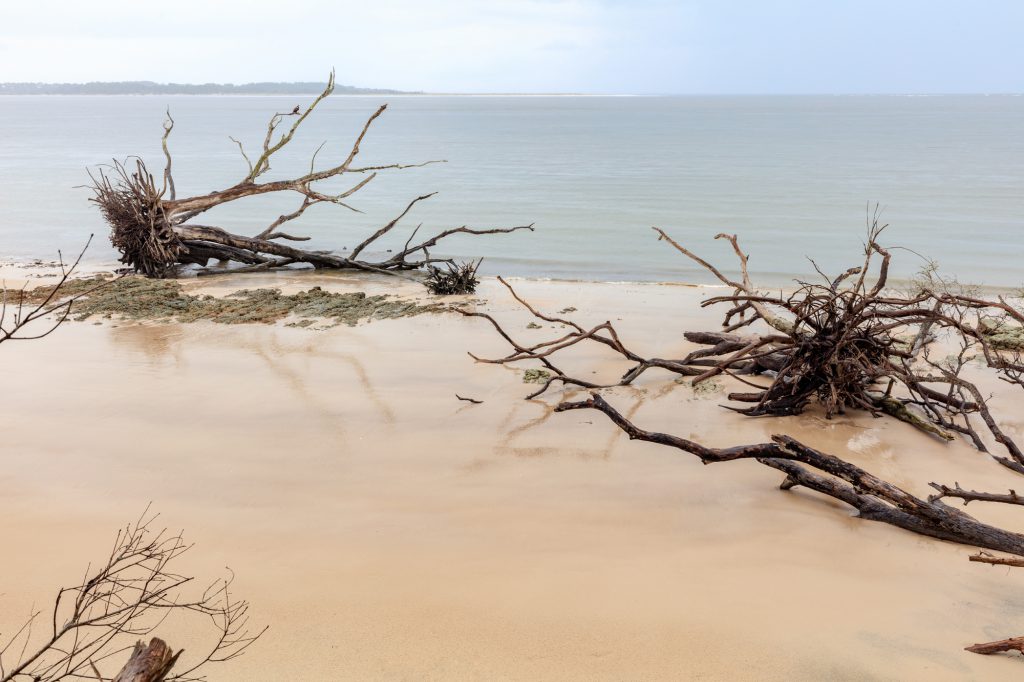 That photo was taken with the Canon 5DsR and the Canon 16-35mm f/4L IS lens at 35mm. At this point it was raining quite hard, so I’m surprised it’s not visible in the photo. Immediately after this photo I took the gear and retreated to my rental car quickly. The gear was wet, but no damage done.

However, it was time to face the facts. The weather wasn’t cooperating, and I had a plane to catch in a couple of hours. So I decided to make my way back to the airport, return the rental car, and just rest until my flight…

But I had to stop for one more picture on the way out from Big Talbot Island. I mean, who could pass up this picturesque scene without stopping for a quick snap? 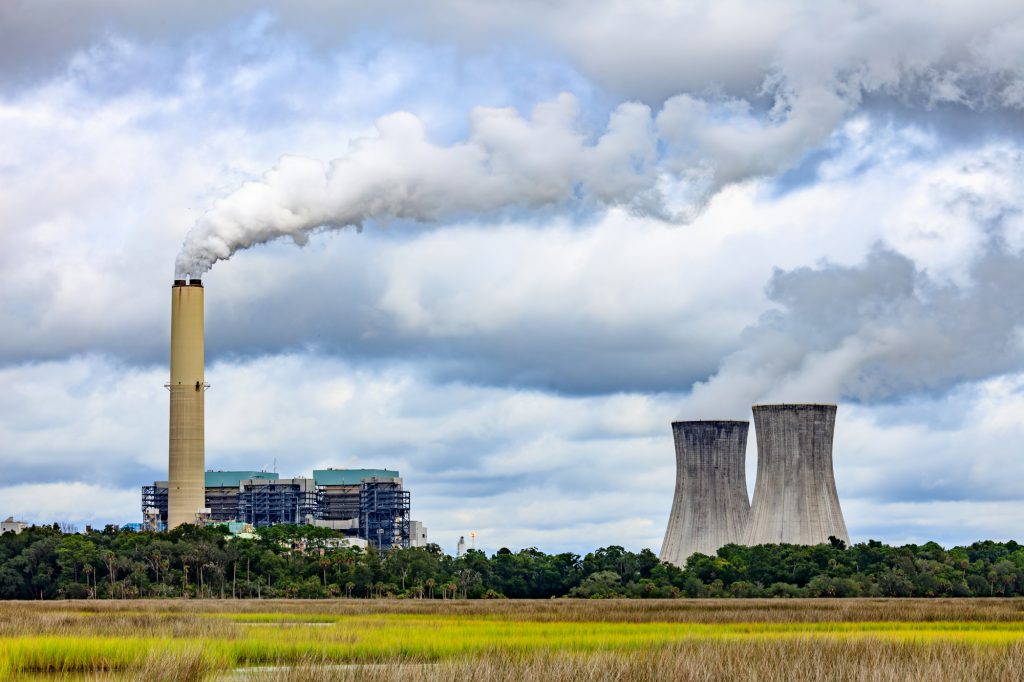 I fought the urge to keep stopping every so often to photograph everything. There is so much to see and photograph in and near Jacksonville, that it leaves one unsatisfied to only have a few hours to do so. I definitely plan to return with more time to visit Big Talbot Island State Park again, as well as other photo worthy areas nearby.

The rest of the trip was uneventful, with me getting another window seat on the way back. Of course, I took more photos.

I was aware from my preliminary research into the camera, that the 5DsR would not perform as well in high ISO situations as my 6D would. Still, I couldn’t help myself but trying it out with some high elevation sunset photos. 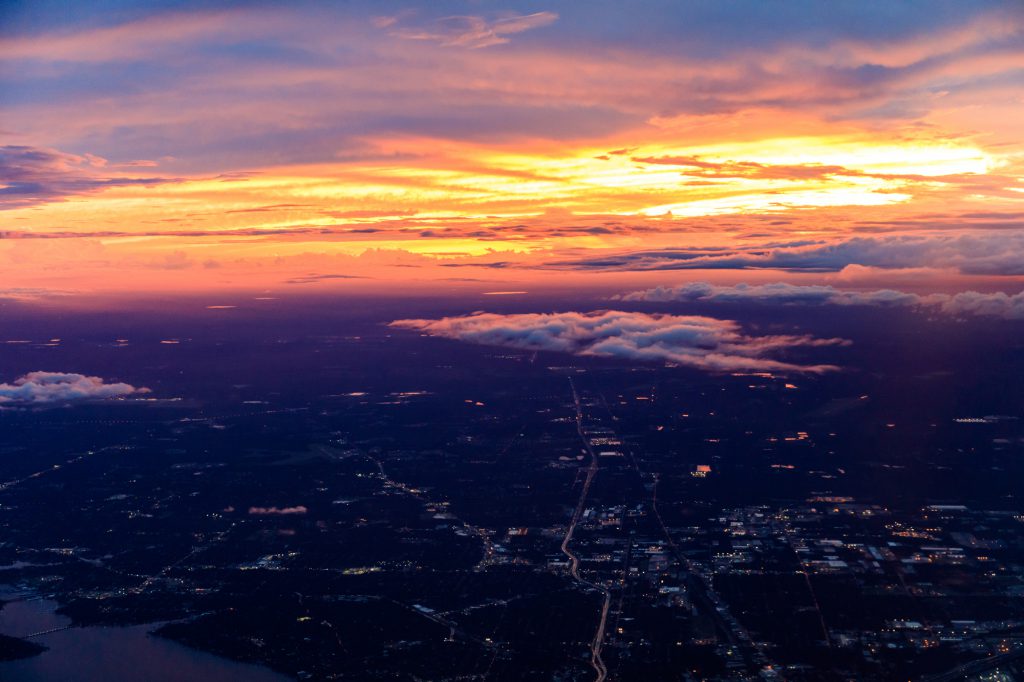 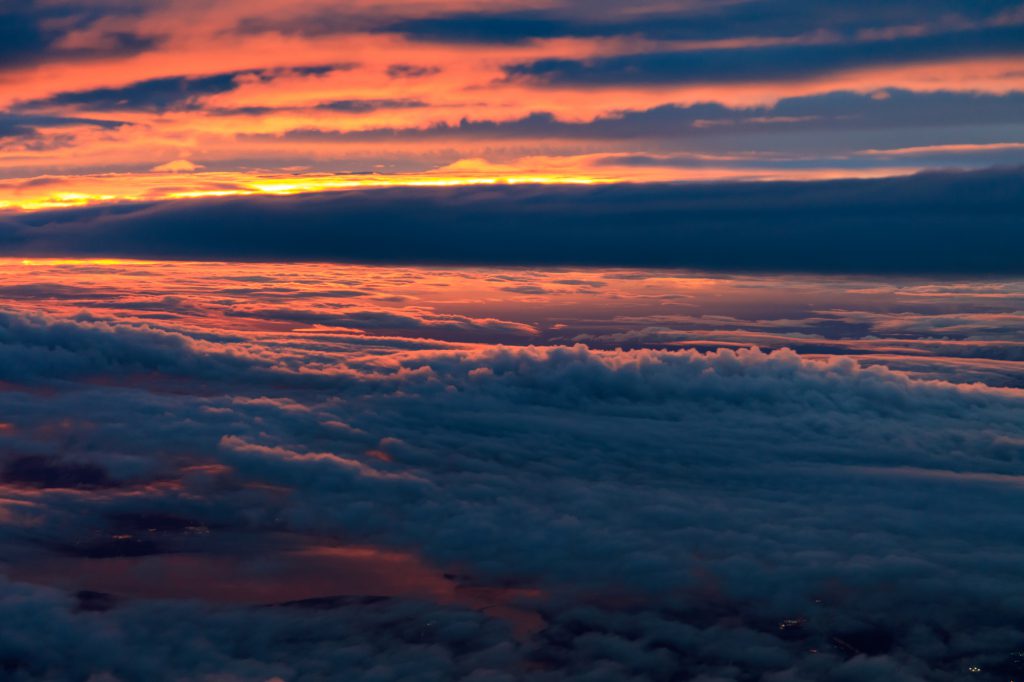 Both of these were shot at ISO 1600, and I was pleasantly surprised with the results. The color rendition is excellent in my opinion, and Lightroom does an excellent job at managing the noise in the images.

Overall, this was a great trip, if unfortunately brief, and I look forward to going back to Jacksonville in the near future. I was also blown away by the quality of the images produced by the 5DsR, and look forward to using it more and more.