I was recently hired to do a couples photoshoot for Arizel & Carlos. The twist? Carlos is a black belt in Jiu Jitsu, Arizel is a very passionate novice in the same discipline, and they both were convinced they should do the photoshoot at their gym, wearing their gis.

I was surprised to find out what I feared would be a cramped space was actually an impressively sized and well equipped facility, aptly called the JACO Hybrid Training Center. Great! Because I had some ideas for the photoshoot, and they all required space…

So, a few things first.

We added a Canon 5D Mark IV camera to our arsenal, as I thought it was time to delegate the 6D to backup and secondary duties. It’s served me well, but I wanted faster and more accurate autofocus, dual camera slots for redundancy, and higher resolution images. While I’ve had a great time shooting the evaluation 5Ds and 5DsR bodies provided by Canon Professional Services, I knew I wanted better high ISO performance and better video, so the 5D Mark IV was the perfect combination for me. Would you believe it if I told you that we purchased the 5D Mark IV that morning, and then drove directly to the photoshoot while the battery charged in our car? Because that’s what happened! Of course, I don’t recommend learning to use a new camera on the job like this, but I felt fairly confident I would know my way around it given my time with the 5Ds and 5DsR bodies, as well as some thorough research in the days before the purchase.

As I discussed in my recent blog post about Ansel’s Smash Cake, I recently upgraded to a second, more powerful Yongnuo 685 speedlite, full TTL Yongnuo wireless transceivers, and much nicer 45″ white satin umbrellas. So all of that came with us to this shoot.

All in all, I had (and used) two cameras, four lenses, two light stands, two flashes, and two wireless transceivers. A tripod and reflector rounded up the equipment I brought with me, but I didn’t actually use those two.

As always, my wife gave me some ideas for poses, and we also took the time to discuss what Arizel & Carlos wanted, and went with that. But let me be honest. I had an idea of what I wanted out of this shoot, and I let it heavily influence the direction of the photoshoot. Let’s call it … artistic license. I think it paid off, they loved the results, and I’m satisfied that I was able to visualize a concept and execute it relatively well. I’ll let you be the judge. Let’s look at some photos! 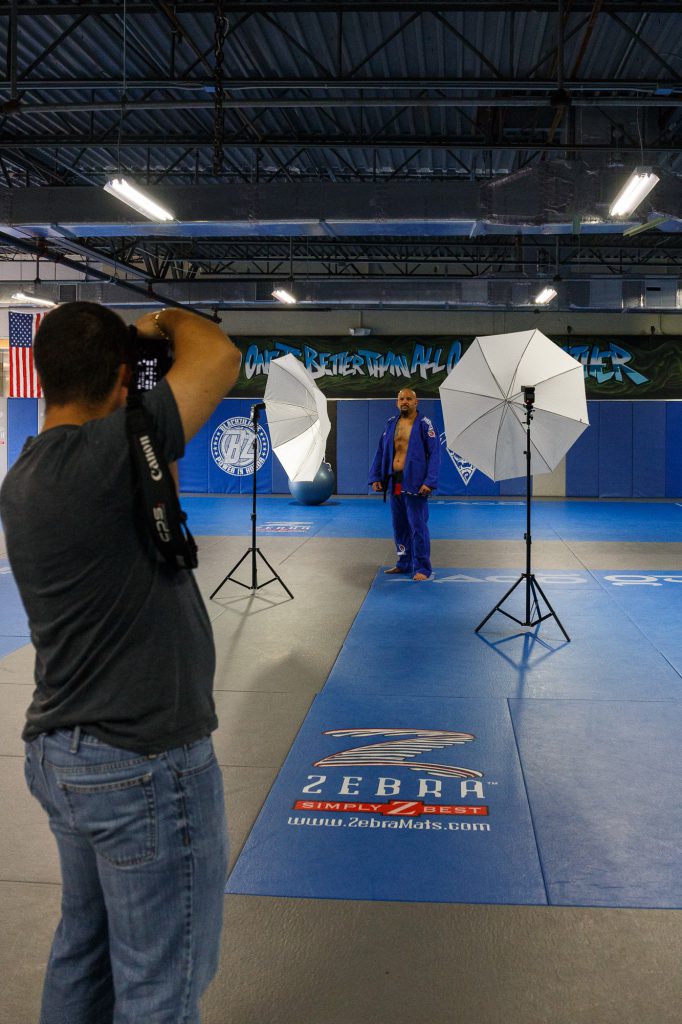 Like I said, this was a large space. It was also decently lit by the overhead lights and the sunlight coming in through the windows. But this was only helpful in posing and moving Arizel & Carlos around. I knew my goal was to have all the light that would be visible in the photographs come from my speedlites, at the angle and intensity that I decided. 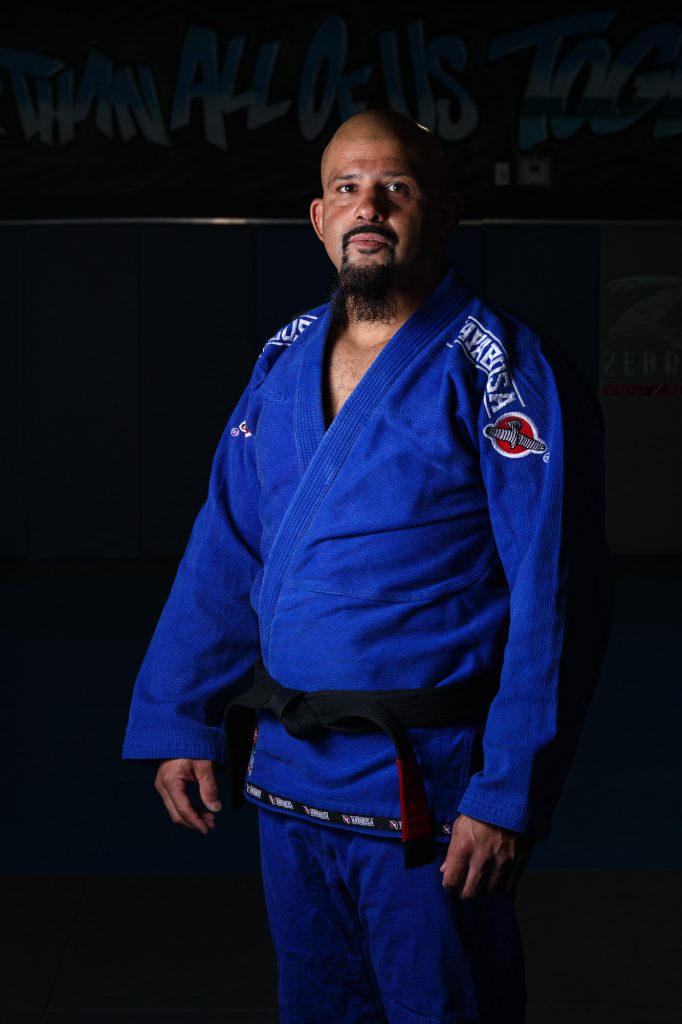 To accomplish this, I set the camera to ISO 100, aperture stopped down to f/8, and shutter speed around 1/160. This effectively created a black image without the speedlites, and with the speedlites… well, we could choose where the light went. 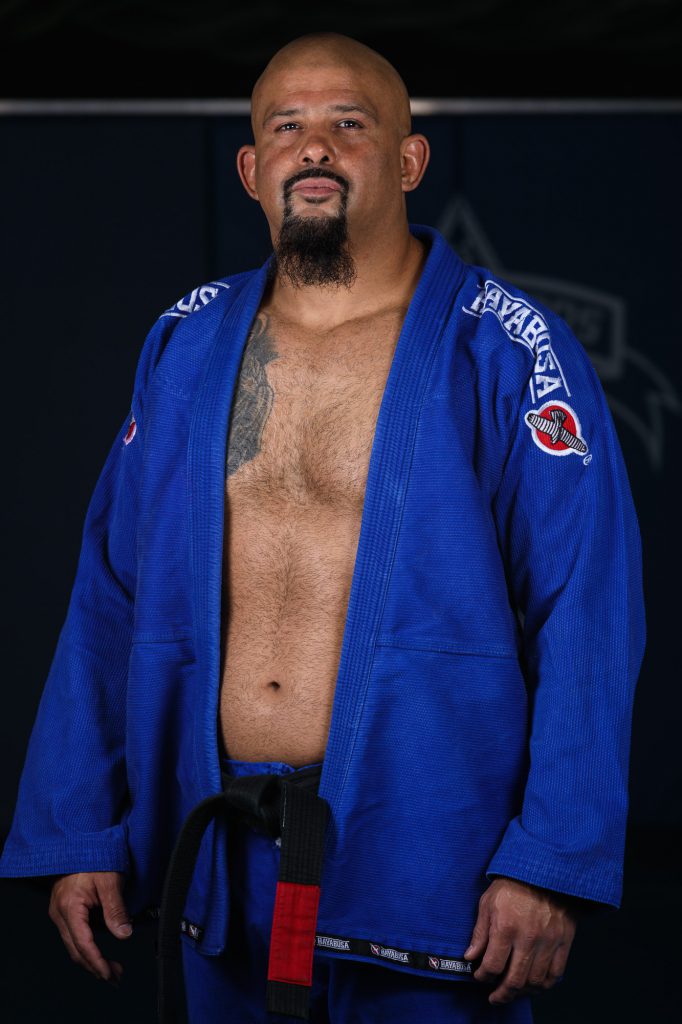 If you’re a photographer, you (most likely) understand what’s going on here. The camera settings and the predictably insufficient lighting at the gym combine to make it seem as if we’re photographing in a dark room. Add some very powerful directional lights (flash, strobe, etc), and we can put any amount of light we want, anywhere we want. 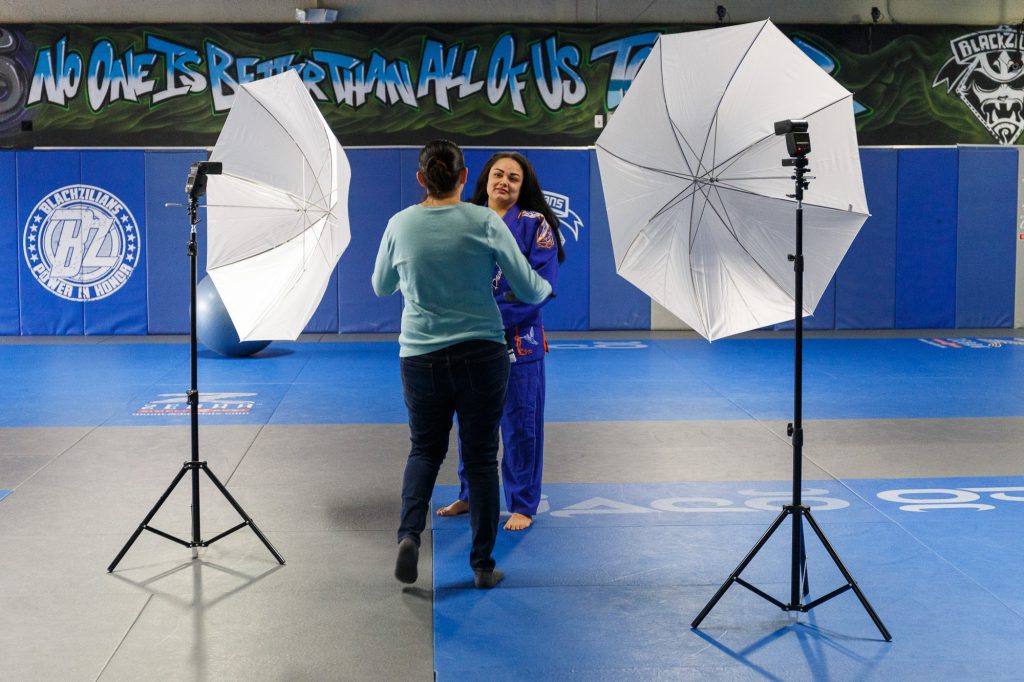 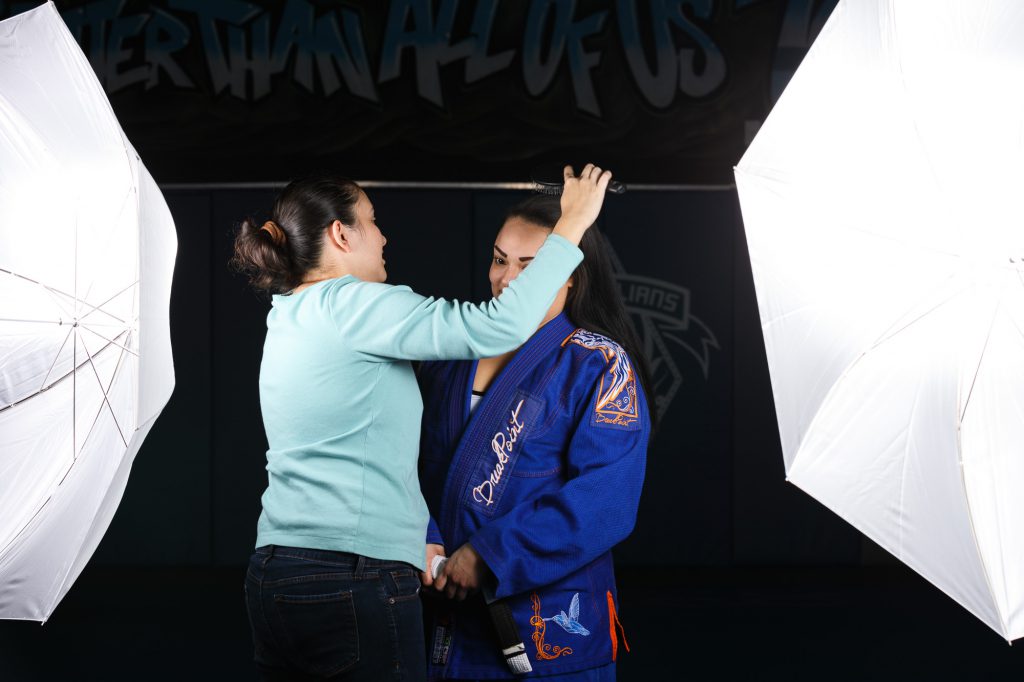 The first was a quick grab taken with the 6D (no flash, auto ISO) showing the ambient light. The second was taken with the 5D Mark IV, using the settings mentioned earlier.

And the resulting image: 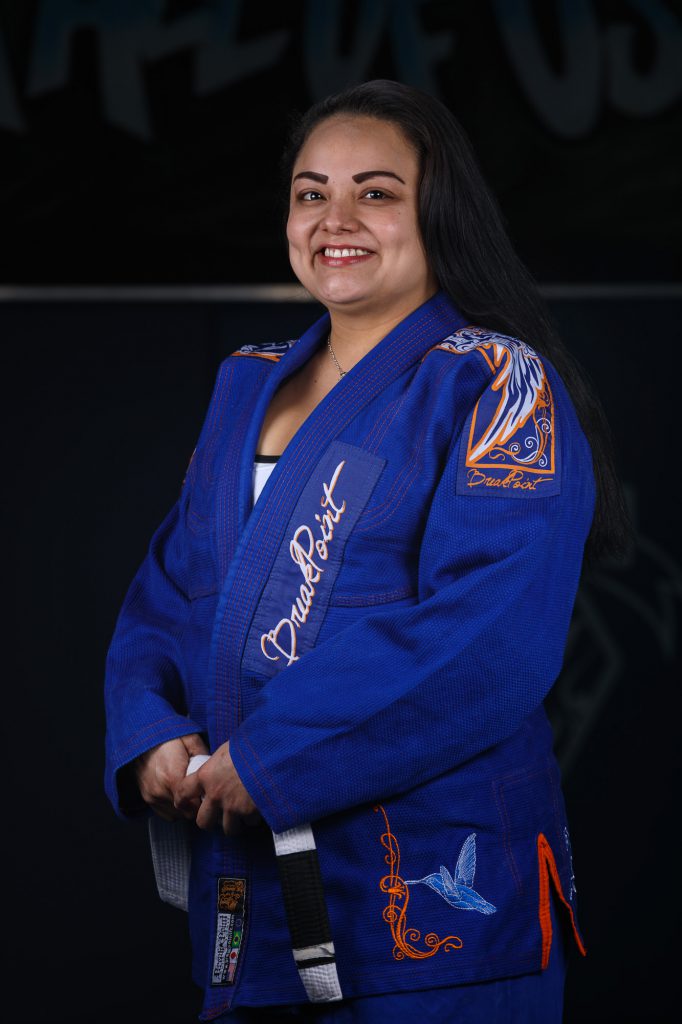 The benefit of using TTL wireless transceivers really becomes obvious in this situation. Since we had the space to work with, I shot most of these using Canon’s 70-200mm f/4L IS lens at a distance from them. If I had still been using my manual Phottix triggers, I would have been walking back and forth, raising and lowering the light stands, etc. Very tedious and a waste of time. The TTL transceivers were a bit more expensive, but worth every dime. Keep in mind, if you’re starting out – you most likely don’t need costly Pocket Wizards – these Yongnuo units are relatively inexpensive and so far, have been nothing short of phenomenal.

Anyways, we took several individual and couples photos, adjusting the umbrellas and flash power as needed to light each shot as we wanted. 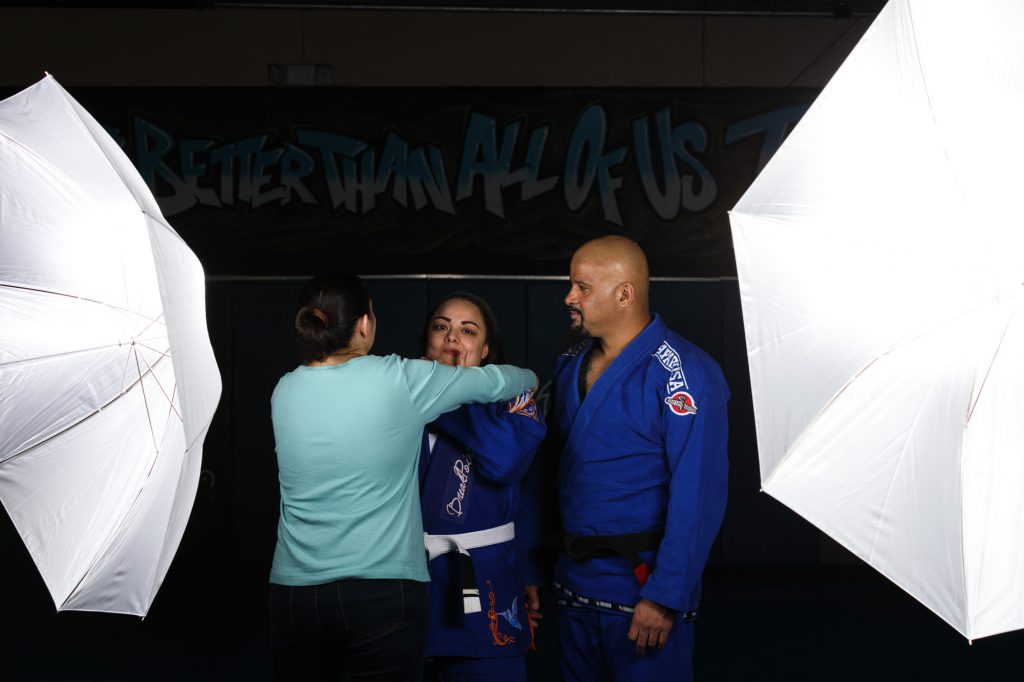 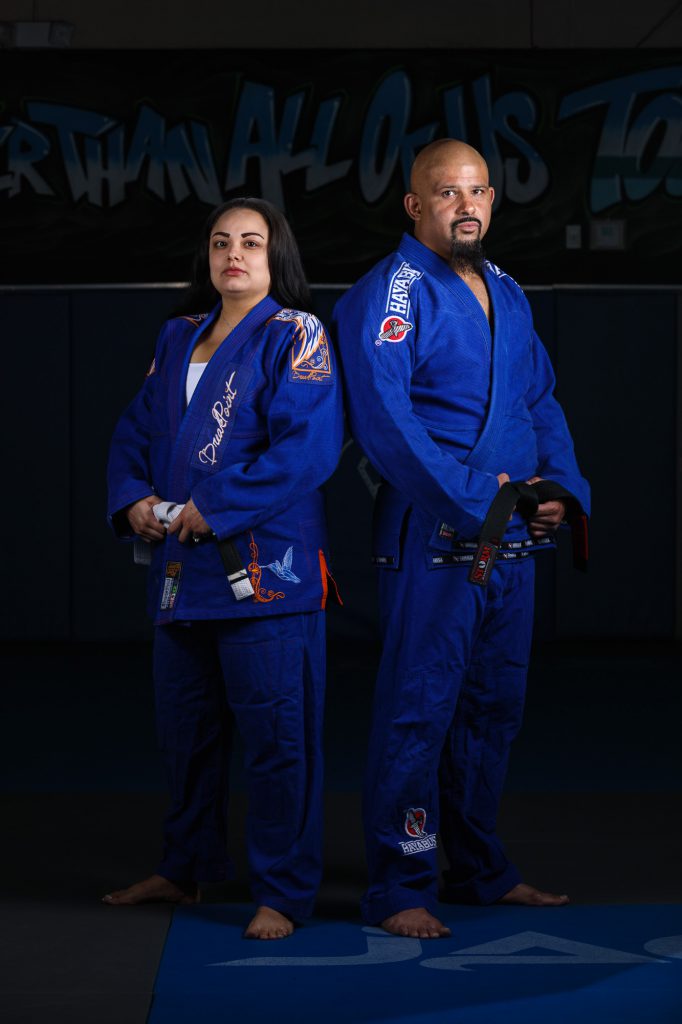 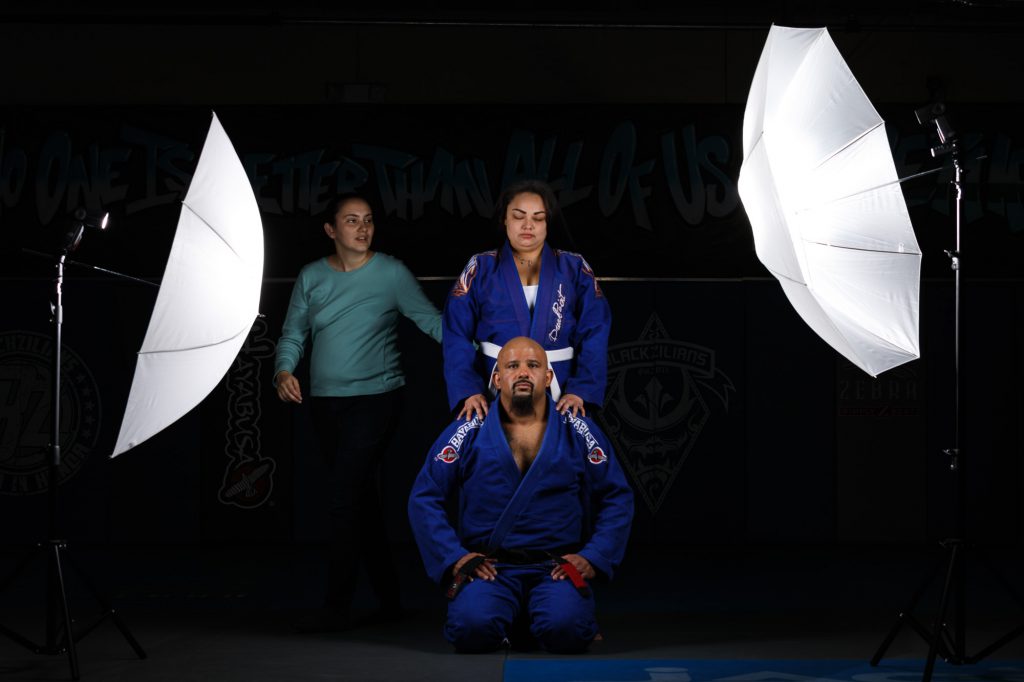 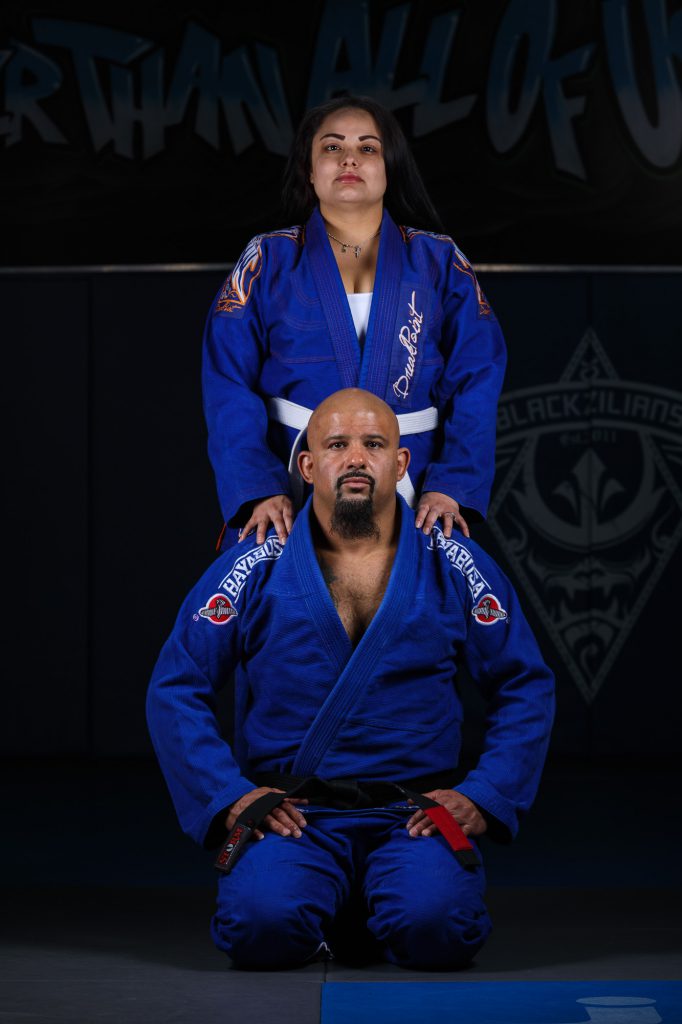 So we had some cute and loving photos. But that’s not fun! Arizel & Carlos wanted to do some staged fight poses, for which I lowered the lights as low as the stands would go, and I got on the floor myself, so I could get a nice angle. 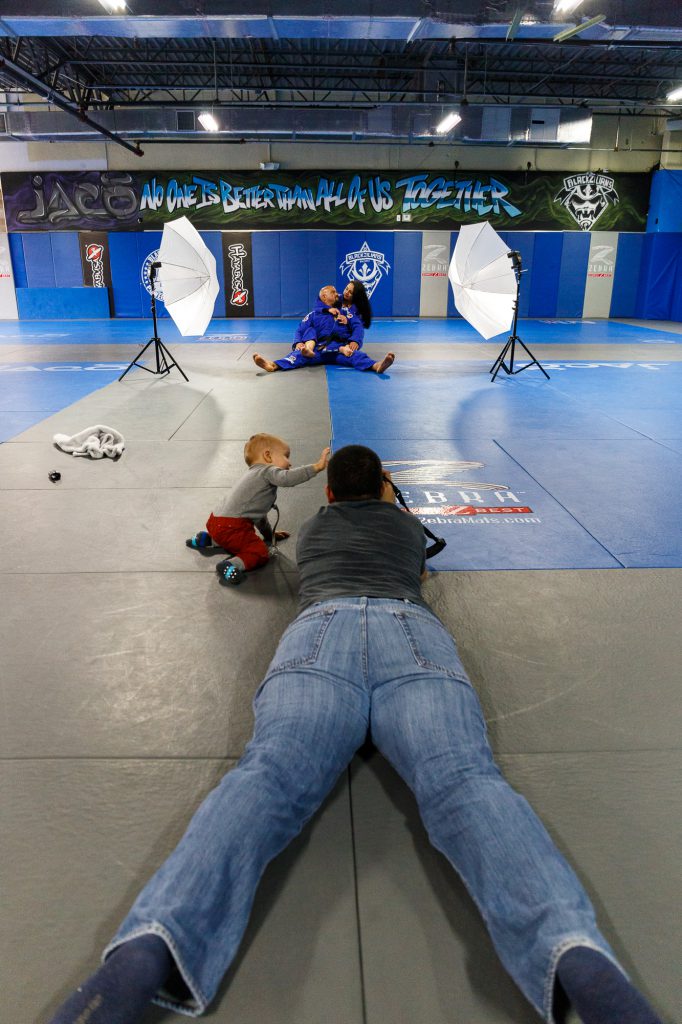 Did I mention Ansel was having a ball playing on the mats? Here he’s trying to help me with the photos. Anyways, check out the view from my angle: 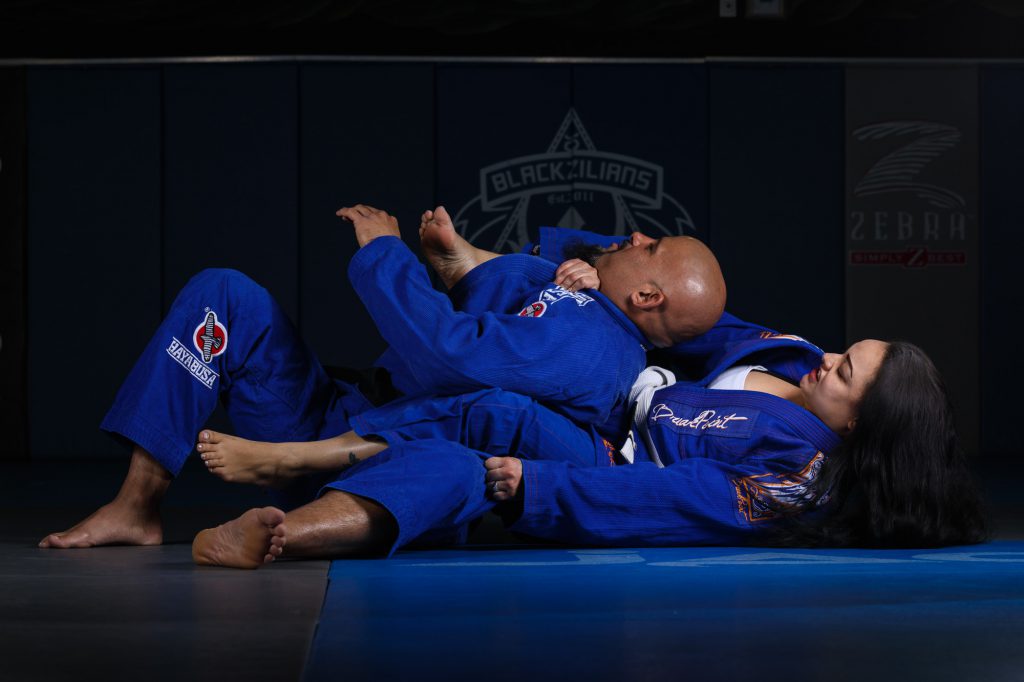 These were staged poses… but that doesn’t mean they weren’t serious. Arizel actually had Carlos in a tight hold there – you can see the intensity of their expressions!

But there is no doubt these two love each other, and I’m so glad I was able to help them capture these special memories. I caught a few kisses, of course – one of our favorite kiss photos was used as the cover photo for this blog post: 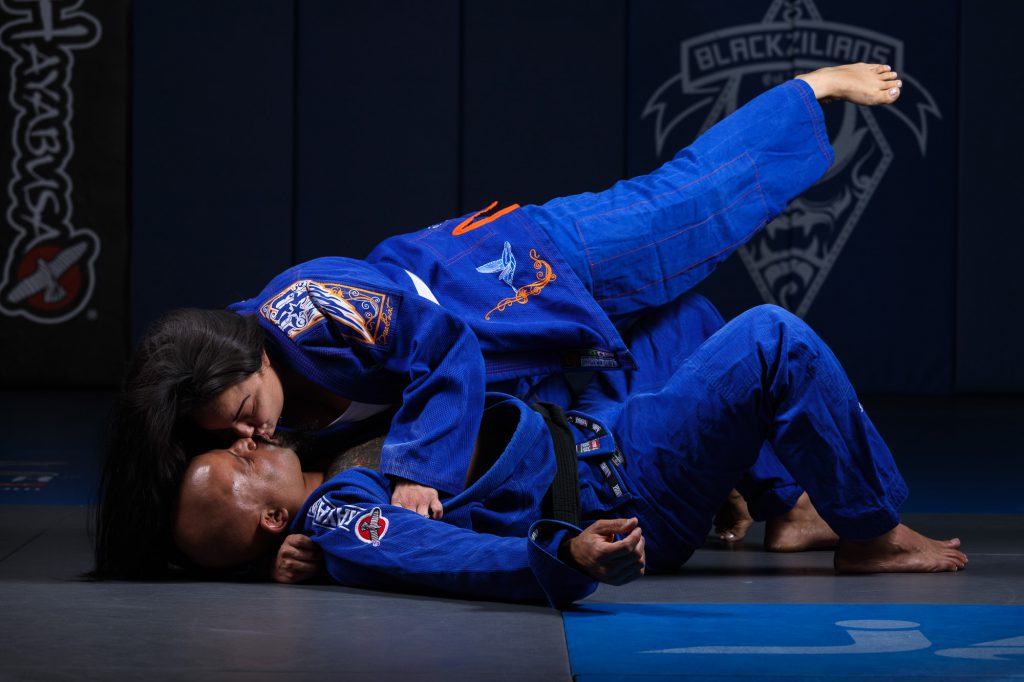 And oh yeah, they wanted close-up photos of their gis…

There were a ton more photos, including some high speed action shots of them sparring, and change of outfit for Arizel. You can check out the rest of the photos in our gallery or leave us a comment in the Facebook album.

This was a very fun photoshoot, where I got to use a brand new camera, and combine multiple off-camera speedlites to craft the lighting for the photos. Arizel & Carlos loved their photos and have shared them all over social media, and I feel proud of the results.

Contact us if you would like to schedule a couples photoshoot for you and your significant other.