So, what do photographer parents do when they welcome a baby boy into their lives? Flood Facebook with photos of the world’s cutest baby, of course. And we’ve done our part, believe me. But besides the spontaneous and constant documenting of every day of our son’s life, we decided early on to do planned, themed monthly photoshoots. We’ve done it every month, and our latest photoshoot was the messiest one yet. 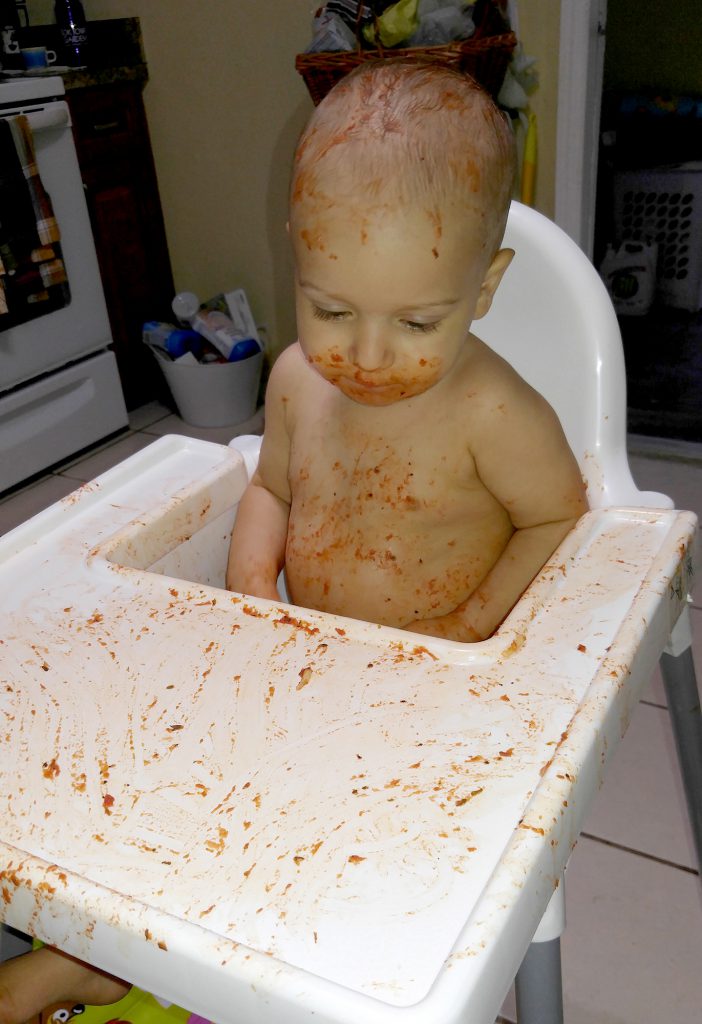 If you guessed “a cell phone picture of the aftermath of a 10-month photoshoot” … then you are correct! Also, I like the way you think.

My wife told me she wanted a spaghetti themed photoshoot. Of course, being the great husband that I am, I had to agree. But only after I made her promise she would do the clean up!

Let’s go over the plan. We don’t have a home studio yet due to lack of space, so we had to make things work in our normal living spaces. I wanted to use the Canon 70-200mm f/4L IS at the telephoto end to get that nice portrait compression, which also meant we needed to find a location in the house that would work for that kind of distance I was going to need. 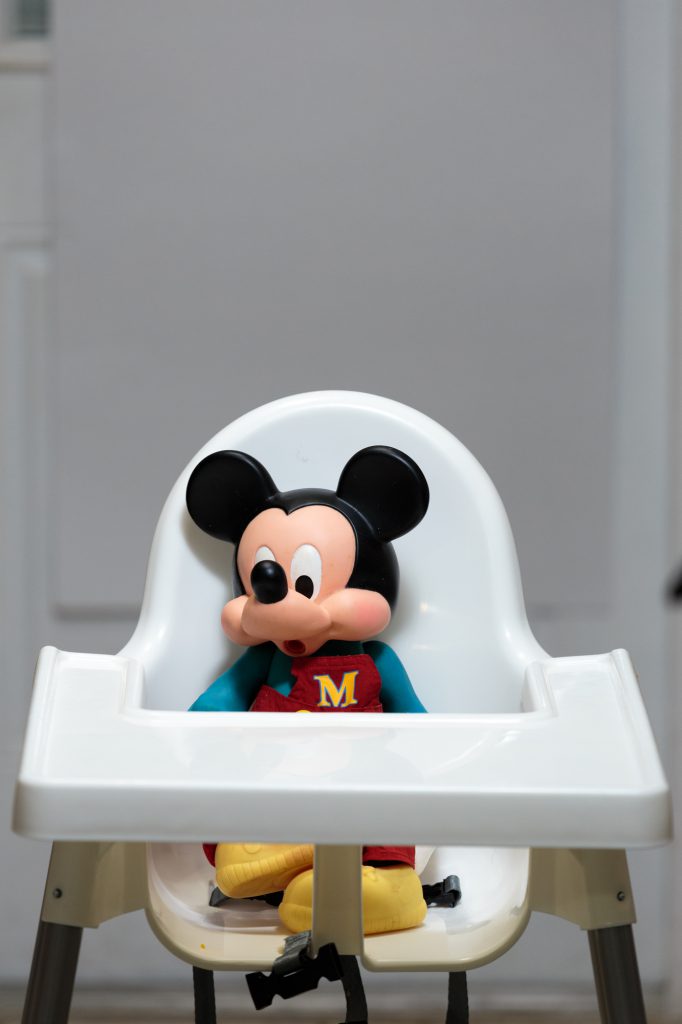 I set up the Canon 6D on a tripod, at a very tall setting so I could have somewhat of a downward angle to the chair where Ansel would be sitting, so the spaghetti could be accentuated. I set up the off-camera flash on a stand with a white shoot-through umbrella, and started working on getting my lighting right. Pro tip: real babies don’t want to wait endlessly while you get your gear set up. Use a toy (like above) or something of similar size to your subject.

The spaghetti was edible and freshly made by my wife, and allowed to cool down. So it was all safe for Ansel to eat while I snapped away (which he did, he loved it!). We pretty much put a ton of spaghetti on his chair, some on his head, and just let him have fun while I took photos. 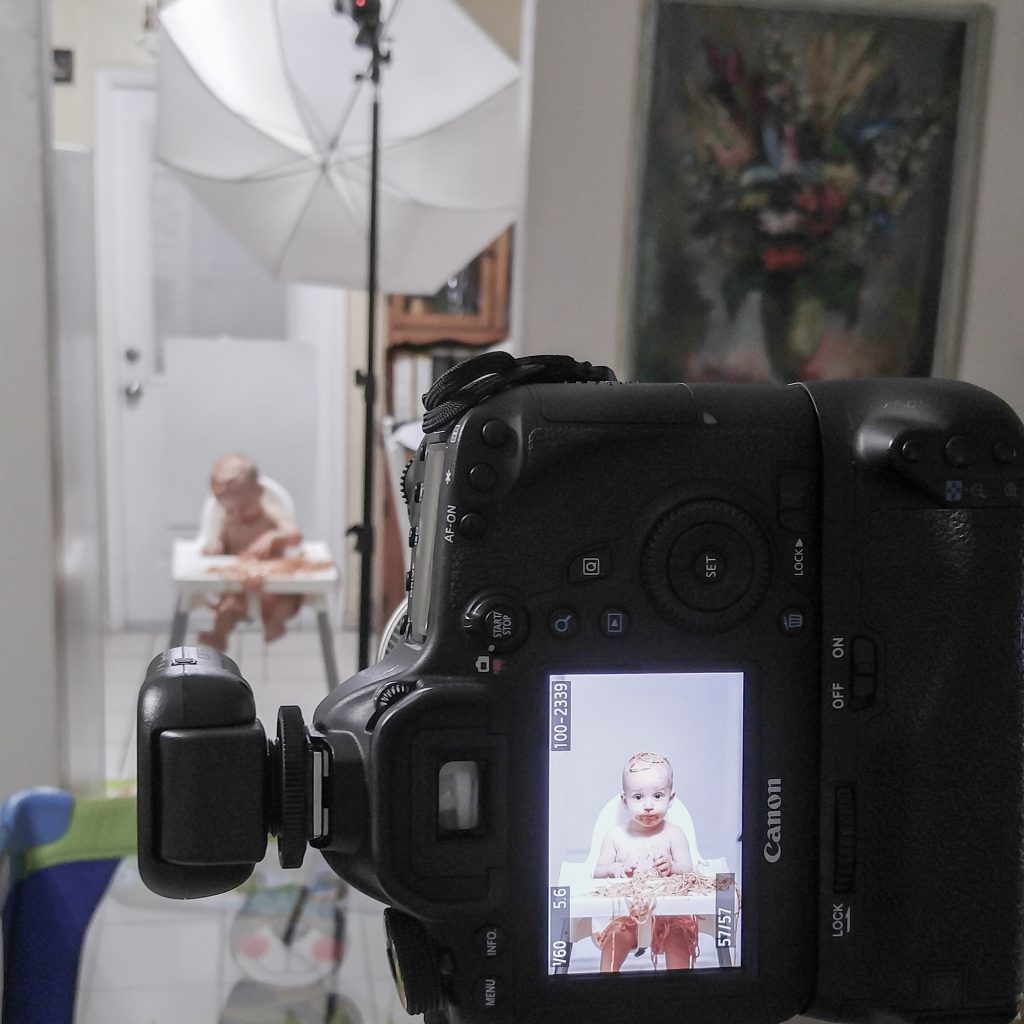 Here’s a cell phone picture to give you a behind-the-scenes look. You can see how limited the space was, and why I was shooting at ISO 1000 in a controlled environment, rather than a lower (and preferable) ISO. If I was in a studio, with multiple lights and more space to position the lights, I would have probably been able to manage a lower ISO. Here, it was a good trade off so I could stay at 1/60, since the 6D performs great at those ISO levels. 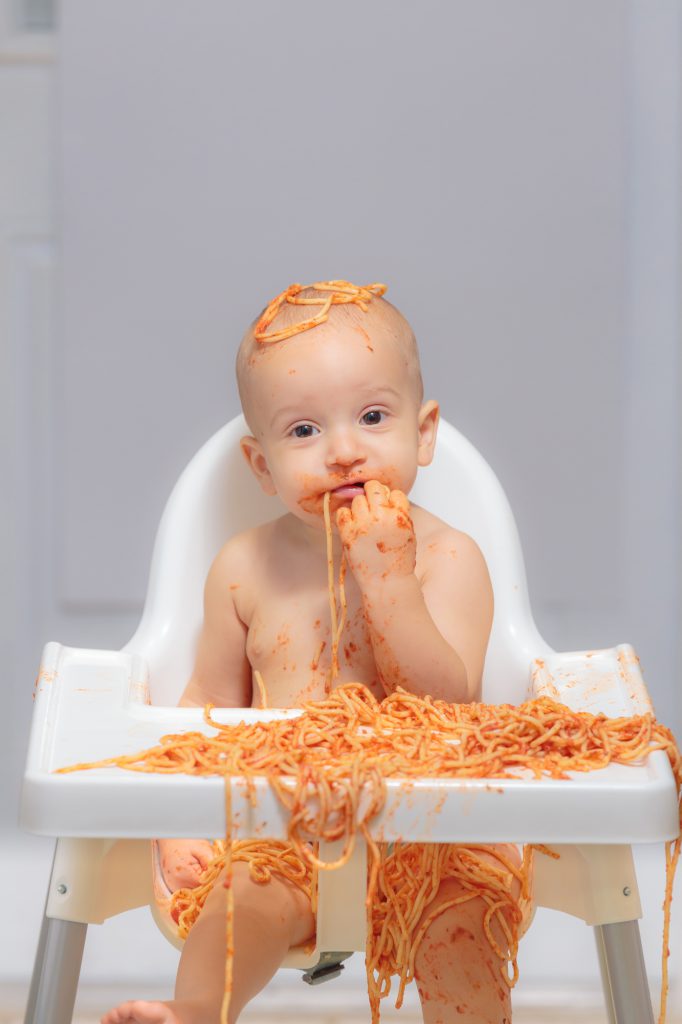 Our favorite photo of them all, although there were many beautiful captures.

My wife’s vision was very specific…she wanted the baby covered in spaghetti (check!) but also wanted “10 months” written in spaghetti…oh boy. I’ve tried my hand at making “believable” writing with clouds, bubbles, flowers, sand…and it never quite looks believable. Maybe I’m just that bad. Whatever the reason, I decided we would forego the special effects and do it using actual spaghetti. 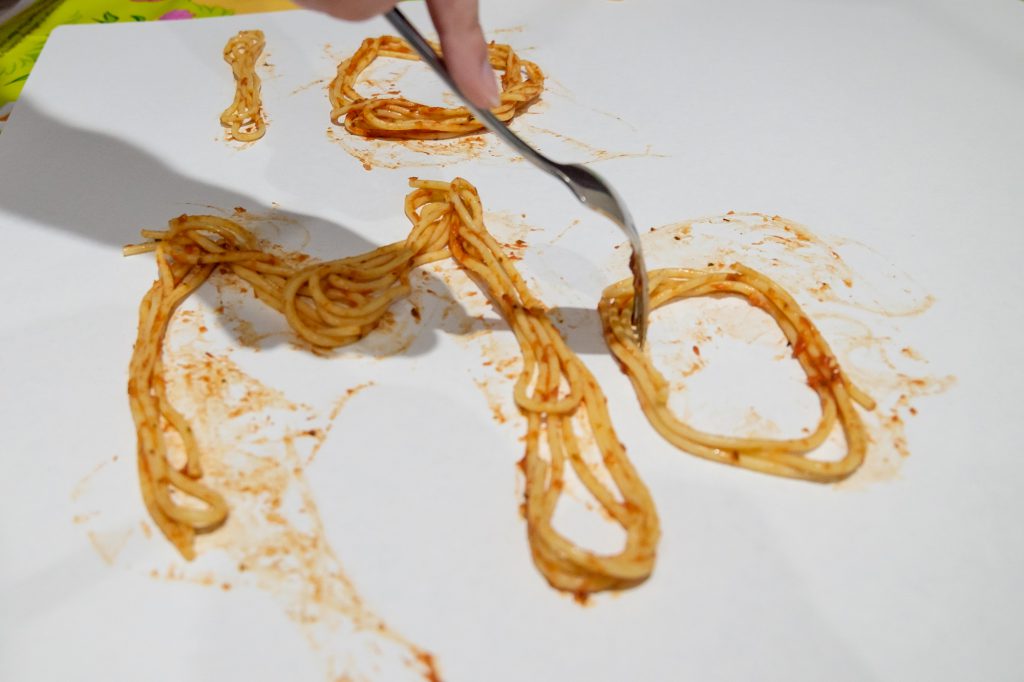 It takes quite a while to make nice letters out of spaghetti. Luckily, my wife had the patience to spell it out. We used a white board for the background, as we planned to then merge this photo with Ansel’s photo for the final result.

Once that was done, I had to photograph it, of course. I switched lenses to the Canon 24-70mm f/4L IS, and again on a tripod, used the same off-camera flash + umbrella set up seen earlier. Since exposure time was no longer a concern, I went down to ISO 100 and f/8, and let the camera choose exposure (Av mode). The shot I ended up using was 1/2” exposure on a timer. 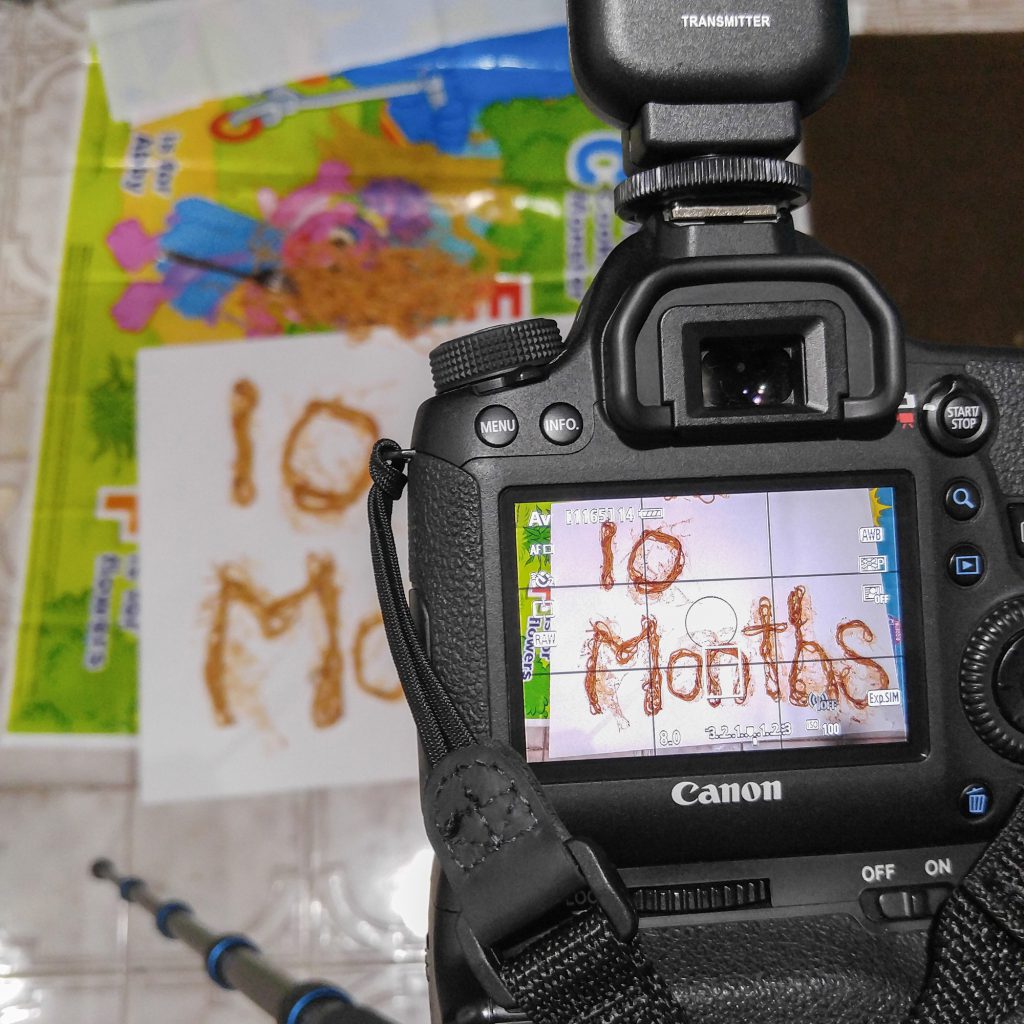 So now I had a great shot of Ansel, and I had a great shot of the spaghetti, so off to Photoshop I go to combine them. Unfortunately, I don’t have screen captures of that, but if you’ve done any compositing, you know how it is. I created a solid color background layer with a shade that complimented the image well (I think), and masked Ansel and his chair out of the background. Then brought in the photo of the spaghetti words, and again masked the words out of the white background. 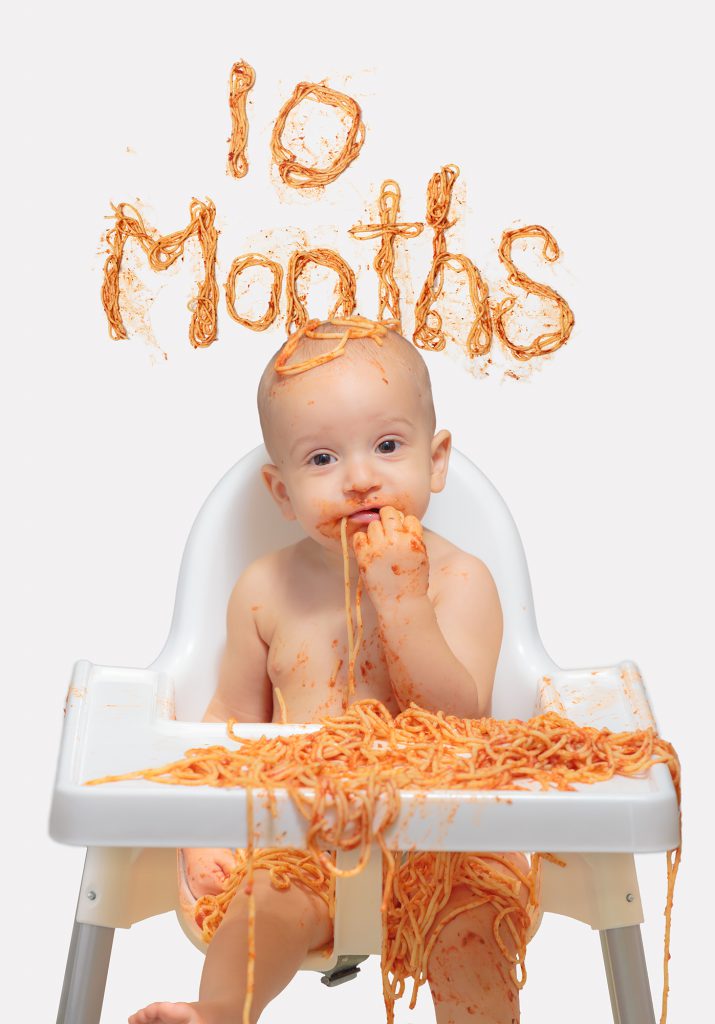 It was good, but not great. It needed more spaghetti! With my wife’s input (I tend to overdo it if left to my own devices), we cloned some of the spaghetti and the spaghetti sauce and decorated the plain background until we were satisfied. 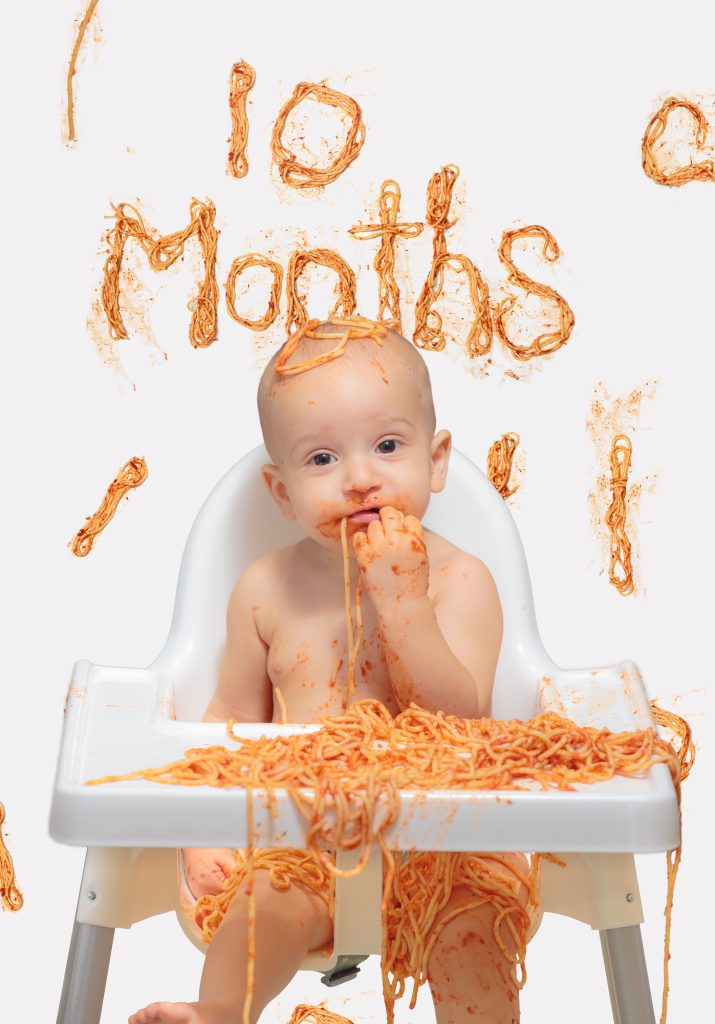 We love it, and we’ve gotten an immense flood of positive feedback on social media, so I thought I would share the story here and maybe it’ll inspire you to do a similarly messy photoshoot with your own little one.

P.S. Immediately after the first photo in this blog post, he was given a bath, and he was in a great mood. I’m very aware that my baby is not a trained model and we do these photoshoots with a ton of love and attention to his needs. He probably had more fun than we did, since he didn’t have to take part in the clean up afterwards! Always remember when photographing babies (your own, and your clients’) – put their safety and comfort first.

Y. Aragon
Baby,Photoshoot,Portraits
UltraCon 2016
Carlitos and his truck: A photoshoot in Wynwood
↑